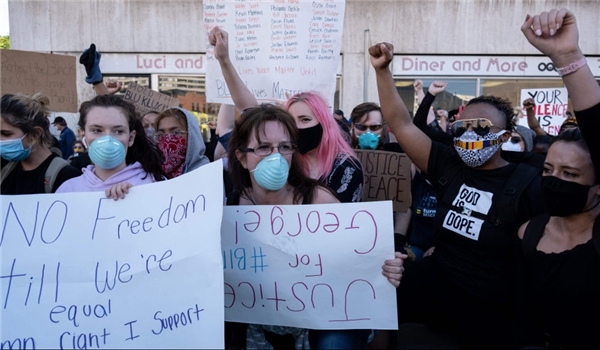 In Washington DC, where protesters set fire to American flags and a historic church near the White House, the percentage of out-of-work black residents outpaces white residents at a rate of about 6 to 1, The Washington Post reported.

African American households have struggled more economically than the national median household, even when unemployment was at single-digit historic lows. Now, months into the coronavirus pandemic that has rendered 40 million people jobless, African Americans have lost jobs at higher rates in many communities.

A recent Washington Post-Ipsos poll found that black people reported being furloughed and laid off at higher rates than white people, underlining the disproportionate toll of the pandemic on African American communities. And this is all happening at time when black Americans are also dying of COVID-19 at much higher rates than white Americans, according to the Centres for Disease Control and Prevention.

“There's nothing that says you don't belong in an economy more than a police officer shooting you dead in the street. It is a symbol of exclusion,” said Andre Perry, a fellow at the Brookings Institution and author of Know Your Price: Valuing Black Lives and Property in America's Black Cities.

“The underlying attitude that lead a cop to kneel on the neck of a person in custody so cavalierly, is the same attitude that corporate executives have, as reflected in the disparate economic outcomes,” Perry added.

Additionally, black workers with resumes equivalent to white workers are paid less and given worse benefits and are more likely to be underemployed compared to white counterparts, Perry noted.

The police killing of an unarmed man like George Floyd was a result of a racist system that cannot be looked at only within the context of policing, he said.

“People are focused on policing,” Perry said, adding, “But this is much broader. This is about a fatigue of policy violence in all areas of life.”

Nationwide, black people have enjoyed a more uneven recovery from the last great economic jolt, the recession which followed the 2008 financial crash, compared to white populations. In terms of household net worth - the median for white households of $171,000 (£136,000) is about 10 times greater than for black households $17,150 (£13,700) in recent years.

The disparities are clear in the places that erupted in riots over the weekend. In New York, where looters laid waste to one of the world's most storied commercial districts, only 32 percent of black residents own homes - less than half the percentage of white residents.

In the San Francisco Bay area, where rioters ransacked stores, banks and a car dealership, only 28 percent of black residents have college degrees, compared to 61 percent of their white counterparts.

In Louisville, where police and national guard forces fatally shot a restaurant owner after protests turned violent, the median household income for black residents is $35,000 (£28,000), compared to $62,000 (£49,600) for white residents.

“This is centuries of structural racism in the economy in education, in housing and other areas that produces a radical racial wealth gap,” Lu added.

There are already signs of the ways that the coronavirus is adding to that economic burden.

While the April unemployment rate for white people has risen to 14.2 percent, the rate for black people and Hispanic people are 16.7 percent and 18.9 percent, respectively, according to Labour Department statistics released last month.

“Black workers are less able to weather such a storm because they have fewer earners in their families, lower incomes, and lower liquid wealth than white workers,” the Economic Policy Institute wrote in a report Monday.

Economists predict that as job losses from the pandemic continue to mount, the eventual recovery will be a steeper road for black Americans.

“The jobs that have been affected the most - like leisure and hospitality - are in industries that have a disproportionate share of blacks,” said William M Rodgers III, a professor of public policy and chief economist at the Heldrich Center for Workforce Development at Rutgers University.

Adding to the economic pain, black Americans are underrepresented among those receiving unemployment insurance, a disparity that some economists have said is due to the difficulty that those who work in more informal or sporadic work capacities.

Black women faced the largest drop in employment according to one frame economists use to gauge work levels, the employment to population ratio, which measures the people who are working out of an entire group. Black women went from 58.4 percent employment in this measurement in February to 47.4 percent in April - a drop of 11 percent, according to the Economic Policy Institute.

“When I saw the numbers I was not surprised to see blacks, particularly black women, bearing a major brunt of this recession,” Rodgers said.

Rodgers is currently part of a commission that is advising New Jersey governor Pat Murphy on how to reopen the state. He warned of another cascade of layoffs that could disproportionately affect minority workers as state budgets are winnowed down from the crisis.

“There is going to be a second hit economically if the federal government doesn't help states,” he said, adding, “The public sector is where many women and minorities got toe hold in the middle class.”

The commission's work was first focused on restoring consumer confidence - no small feat in the middle of an economic drag that will not fully abate until there is a vaccine or treatment, experts agree.

William J Collins is an economic historian at Vanderbilt University who has examined the effects of the 1960s riots on the labour market. He said that riots were rightfully understood in the context of financial issues, but that they did not always correspond perfectly to local conditions like unemployment and other economic strife.

“In the Sixties, it didn't seem to play out that way - they weren't in places where income was lowest and unemployment was highest,” he said.

But he said riots were a palpable expression of discontent and resentment.

“One is just an ongoing level of discontent with the amount of inequality that we've seen over the last several decades,” he said, adding, “My sense is that the larger the crowd, the higher the level the discontent, the more young people there are with a sense that there's not much to lose - the opportunity costs of engaging in violence or vandalism seems lower.”