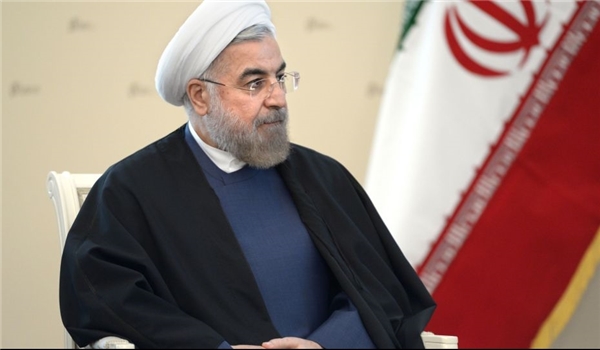 Iran will stick to its commitments if the EU lives up fully to its obligations, Rouhani said in a phone conversation with his Finnish counterpart Sauli Niinistö.

The US discard of the JCPOA is in violation of the UN Security Council resolutions and contrary to international law, political rules and all moral values, he noted.

Referring to launching of the Instrument in Support of Trade Exchanges (INSTEX) by Europe, as well as the Swiss financial channel with Iran (SHTA), Rouhani made it clear that these mechanisms have not yet become practical, urging the EU to activate them.

Sauli Niinistö, for his part, welcomed the launch of INSTEX and he voiced Finland’s readiness to join the financial mechanism, adding that Helsinki supports the payment of the International Monetary Fund loan to Iran.

Calling the JCPOA as an international agreement, he underlined that Finland is making every effort to preserve the deal.

In relevant remarks on February 23, Hassan Rouhani underlined that his country expects the European states not to surrender to the US pressures and bullying.

"We expect the EU to stand against the US illegal measures," President Rouhani said in a meeting with Austrian Foreign Minister Alexander Schallenberg in Tehran.

He referred to the US sanctions on food stuff and drugs against Iran beside economic embargos, and said, "Imposition of such sanctions is a terrorist act and we expect the EU to comply with its human responsibility."

The president, meantime, said the impacts of the US sanctions on Iran have been exaggerated by the western officials and media.

Elsewhere, President Rouhani said that regional security should be established by the countries of the region, and added, "Today, the security of the regional waterways has decreased compared to the past and many regional states, including Yemen, Iraq, Syria and Afghanistan, are not in a proper security conditions."

"All problems in our region are the result of the US wrong and illegal interference in the regional issues," he said.

Schallenberg, for his part, underscored Iran's important role in regional security and stability, and said, "Preserving the nuclear deal is our and the EU's main policy and we will do our best efforts to this end."

In relevant remarks on February 22, President Rouhani, in a meeting with Dutch Foreign Minister Stef Blok in Tehran, highlighted that following the US exit from the nuclear deal, officially known as the Joint Comprehensive Plan of Action (JCPOA), the Europeans have failed to save the deal and deliver on their commitments.

"Over the past 21 months since the US exit from the JCPOA (the nuclear deal, officially known as the Joint Comprehensive Plan of Action), the European Union has unfortunately failed to take effective steps in line with mutual relations and the fulfillment of its commitments under the JCPOA," Rouhani said in Tehran.

"We believe that the nuclear deal served the interests of the region and the world and the US move harms all [nations] and even the American people," he added.

Pointing to the US’ “illegal, unilateral and cruel” sanctions against the Iranian nation, which also include medicine and food, Rouhani said, "It is expected that the world’s free nations vociferously condemn these unlawful sanctions."

US President Donald Trump, a stern critic of the historic deal, unilaterally pulled Washington out of the JCPOA in May 2018, and unleashed the “toughest ever” sanctions against the Islamic Republic in defiance of global criticism in an attempt to strangle the Iranian oil trade.