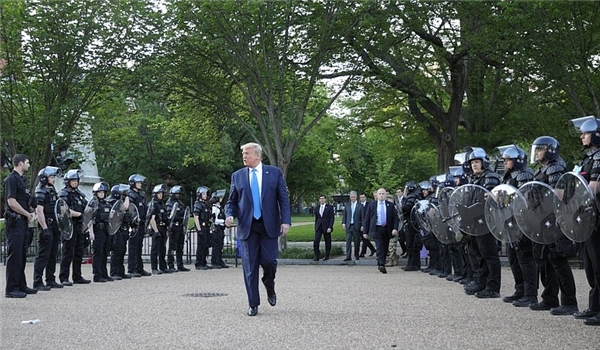 Trump declared himself the “president of law and order” on Monday and said he would deploy the US military to cities and states if governors refused to "dominate" their streets with National Guard deployments, The Hill reported.

“The president is calling out the American military against American citizens,” Cuomo tweeted Monday.

“He used the military to push out a peaceful protest so he could have a photo op at a church,” Cuomo added, referring to law enforcement in DC firing tear gas into a crowd of protestors before Trump took the podium Monday at the Rose Garden.

Trump then walked to St. John’s Church, close to the White House, and took photos holding up a bible with his staff.

“It's all just a reality TV show for this president,” Cuomo said, adding, “Shameful".

In an interview with CNN, Cuomo stated that Trump “wants to recreate reality”, noting that the vast majority of protesters have been peaceful and are making “a very valid point”.

“When was the last time you had the military called out against Americans?” Cuomo said, adding, “Is that Americana? Is that making America great? I don’t think so.”

Illinois Gov. J.B. Pritzker (D) similarly rejected the idea that Trump has the ability to send troops into his state.

Pritzker told CNN Trump is trying to “change the subject from his failure” responding to the coronavirus pandemic.

“The fact is that the president has created an incendiary moment here," Pritzker told CNN's Erin Burnett, adding, "He wants to change the subject from his failure over coronavirus, a miserable failure and now seeing a moment when there's unrest because of the injustice that was done to George Floyd that he now wants to create another topic and something where he can be the law and order president."

Pritzker also rebuked the use of tear gas on the protesters ahead of Trump’s speech and photo at the church.

"Peaceful protesters have a right to be there," Pritzker said, noting, "I saw what happened. I was watching CNN when all of a sudden the troops move forward, and then they started pushing the protesters, throwing tear gas canisters. This is not the way we behave in the United States. Our law enforcement are out there on streets trying to protect people. They're not at least here in Chicago, we're not in the business of trying to put down peaceful protests."

Michigan Gov. Gretchen Whitmer (D) said the country needs a leader who can “bring unity” and show “compassion and competence”, and argued Trump’s remarks and the tear gas fired at the protesters near the White House is destructive.

“You know what would help take the heat down from everything? A real showing, a general showing of concern about the underlying problems,” Whitmer told CNN.

CNN’s Anderson Cooper asked Whitmer if she wants military forces in her state.

“If it ever came to that to that moment it would be because they've thrown a lot more gas on a fire that was burning,” she responded, adding that she does not want that to happen.

Protests have raged across the country in response to Floyd's death last week.

Floyd died in Minneapolis police custody after an officer knelt on his neck for several minutes. The officer, Derek Chauvin, was fired and has been charged with third-degree murder and second-degree manslaughter.

Three other officers were fired but have not been charged.