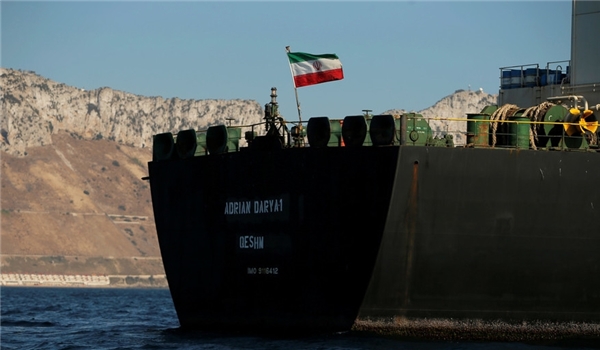 TEHRAN (FNA)- Secretary-General of the International Maritime Organization Kitack Lim promised that the legal department of the IMO will pursue the US threats against the Iranian oil tankers heading towards Venezuela.

"I will ask the legal officer of the IMO to study the case of US measures and threats against Iran as much as possible," Lim said in a video call with Head of Iran's Ports and Maritime Organization (PMO) Mohammad Rastad on Saturday.

Rastad, for his part, said that the US threats and measures directly affect the maritime security and performance.

"In addition to the US continued interference in Iran's legal maritime activities, recently, 5 (Iranian) ships were voyaging towards Latin America which were threatened by the US as they were on a completely legal mission based on international rules and regulations," Rastad said.

The fourth ship of Iran's fuel-carrying flotilla berthed at Venezuela's port on Friday morning as an indicative of the resolve of two independent Iranian and Venezuelan nations to pursue the right to free shipment.

The fourth of the Iranian flotilla, carrying gasoline and related products to Venezuela, successfully anchored in a Venezuelan port in the morning of May 29.

Last week, President Rouhani said his country is always entitled to defend its sovereignty and territorial integrity, and warned that if his country's oil tankers in the Caribbean or anywhere in the world get into trouble by the Americans, Tehran will definitely retaliate.

Also, Chief of Staff of the Iranian Armed Forces Major General Mohammad Hossein Bagheri last week warned Washington of the dire repercussions of any hostile move against Iran's interests, vowing that Tehran would not hesitate to strike back in case it is targeted by the US.

“Troubling the oil tankers is a violation of international laws and security. Both international organizations and countries which are sensitive to the laws and waterways’ security should certainly show reaction to such an act,” General Hatami told reporters after a cabinet meeting in Tehran last week.