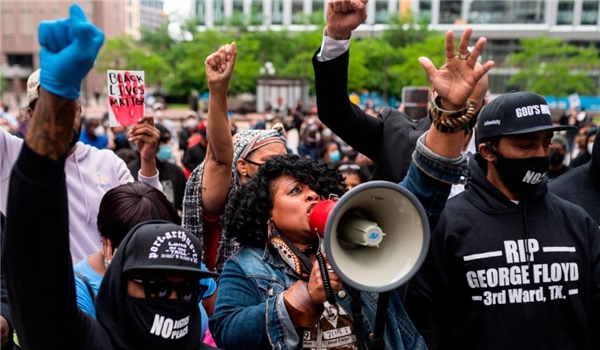 TEHRAN (FNA)- The Iranian Foreign Ministry in a message expressed regret over the murder of black Americans by the government, saying the voice of protesters should be heard in the US.

“The protestors' voice must be heard. In doing so, suppressing the suffering Americans & #PressFreedom must URGENTLY be stopped,” it added.

In a relevant critical tweet on Thursday, Iran blasted again the US police for showing violence against the black people, describing it as an indication of systematic racism in the country.

"Brutal killing of George Floyd by Minneapolis' white man in uniform in cold blood is a harrowing demonstration of systematic racism and white supremacism glorified by the current administration," Foreign Ministry Spokesman Seyed Abbas Mousavi wrote on his twitter page.

He also posted the footages which display how Floyd was killed by a white police officer.

The Iranian foreign ministry had also on Wednesday lashed out at the US police brutal behavior.

“6 years after ‘I can't breathe’ pleas of Eric Garner, George Floyd, another black man, dies after a cruel and inhumane arrest,” the foreign ministry wrote on its official twitter page.

The tweet came after a video of a handcuffed black man dying while a Minneapolis officer knelt on his neck for more than five minutes sparked a fresh furor in the US over police treatment of African Americans Tuesday.

“It seems that US police brutality against blacks knows no boundaries. And as always, the response to calls for justice, is employing even more force,” the tweet added.

Police and protesters clashed in Minneapolis on Tuesday evening following a demonstration at the intersection where George Floyd was killed in an altercation with several police officers the day before.

Hundreds of protesters gathered in the city on Tuesday evening to demand justice after Floyd, who was African American, was killed when a white Minneapolis police officer knelt on his neck as he lay on the ground during an arrest. Footage of the incident showed Floyd shouting “I cannot breathe” and “Don’t kill me!”

A large and diverse crowd had gathered at the start of the protest, with some carrying signs reading “I can’t breathe” and “Jail killer KKKops” and chanting “Prosecute the police.” Activists had blocked traffic for several blocks in every direction, and the crowd spilled out into the streets.