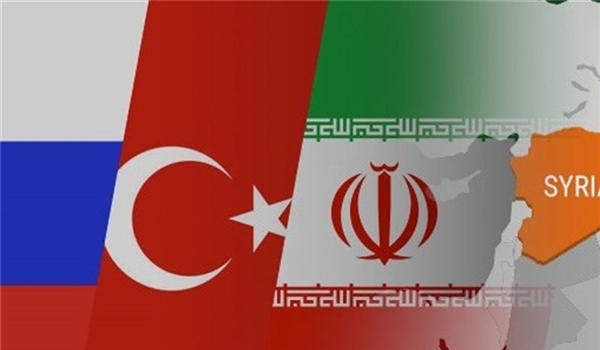 In a phone call with Turkish Parliament Speaker Mustafa Şentop, Ghalibaf underscored the need for continuation of trilateral talks between Iran, Turkey and Russia on the basis of Astana Peace Process on Syria.

Ghalibaf noted that Iran’s parliament welcomes and supports any move for expanding of bilateral ties.

Iran’s newly-appointed speaker also emphasized the importance of economic cooperation between the two countries, saying, “given the significance of mutual ties, Iran and Turkey Parliamentary Group will soon be established.”

Mustafa Şentop, for his part, said that Turkey's parliament is ready to bolster friendly ties in political, economic and cultural fields.

Sentop expressed hope that, having contained coronavirus pandemic, trade and economic exchanges would normalize between the two countries.

He strongly condemned unjust and cruel US sanctions imposed against Iran.

On April 22, Iran, Russia and Turkey’s foreign ministers stressed the need for continued talks and consultations within the framework of the Astana process to find a solution to the crisis in Syria.

The three top diplomats conferred on a range of issues, including the situation in the militant-held province of Idlib in Northwestern Syria, the Syria Constitutional Committee, the need for the lifting of unilateral sanctions amid the coronavirus pandemic, the humanitarian situation in Syria and repatriation of refugees to the Arab country.

They stressed that Syria’s independence, national sovereignty and territorial integrity must be safeguarded while emphasizing on the need to distinguish terrorists from opposition groups as the battle against militants would continue across the country.

Zarif pointed to his early consultations with the UN special envoy for Syria Geir Pedersen, and praised his efforts to facilitate intra-Syria talks within the framework of the Constitutional Committee. He also stressed the need for protecting the Committee’s independence and preventing any foreign interference in its activities.

Pointing to the ongoing coronavirus pandemic, Zarif said unilateral sanctions were seriously hampering Iran’s fight against the virus, and said the international community and the United Nations should shoulder the responsibility to help the removal of unilateral embargoes, alleviate the sufferings of the Syrian people and address the status of refugees in camps occupied by the US.

He also called for the immediate repatriation of Syrian refugees to their homeland and the importance to deliver humanitarian aid to the Syrian people.

The Iranian foreign minister also condemned Israel’s constant acts of aggression against Syrian territory as violation of the Arab country’s sovereignty and international law and a threat to regional security.

The Iranian, Russian and Turkish foreign ministers also emphasized the need for proceeding with trilateral consultations at all levels and holding the sixth summit of the Astana Process in Iran after the normalization of situation created by the coronavirus outbreak.

Turkey — along with Russia and Iran — entered two frameworks of Syria-focused negotiations that resulted into two agreements.

A first deal was signed in Kazakhstan’s capital Nur Sultan, formerly called Astana, arranging for the creation of de-escalation zones across Syria, including in parts of Idlib. The second one that came about in the Russian resort city of Sochi allowed Ankara to bring in a small number of forces to man the observation posts to reinforce de-escalation.

Ankara has, however, been found in default of both the deals by failing to separate terrorists from what it calls “moderate” opposition groups in the Idlib zone and by sending thousands of troops and heavy military hardware into the province in an unprecedented incursion to back the militants.

Zarif had earlier paid a visit to Syria where he held talks with President Bashar al-Assad and his counterpart Walid al-Muallem, discussing the latest developments in Idlib and reaffirming the need to protect the war-torn country’s sovereignty while keeping anti-terror battles.