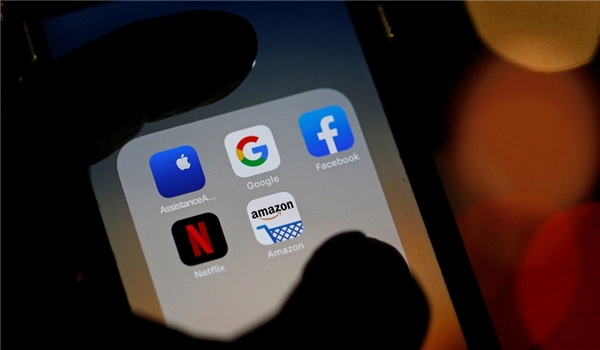 TEHRAN (FNA)- Tech giants like Google, Facebook and Amazon could be forced to pay higher taxes in Europe as governments search for new revenue to deal with the COVID-19 crisis, CNBC reported, citing its sources.

“We see digital goods/services tax conversations advancing most rapidly in Europe, where the scale of ambition to use the EU budget to finance economic recovery from coronavirus may see Brussels taking an increased interest in the attractive potential tax base of e-commerce and digital services,” David Livingston, an analyst at the research firm Eurasia Groupm, stated.

The European Commission is expected to unveil new spending plans this week and is likely to look at additional taxes, such as a carbon duty, as new sources of revenue.

According to Dexter Thillien, a senior industry analyst at Fitch Solutions, there are two reasons why tech giants could be asked to pay more.

“The first is that they will be the companies making the most money during and after the pandemic, and the second is because there have been many moves towards digital taxation,” he added.

The Organization for Economic Cooperation and Development (OECD) has delayed its target to reach a digital tax plan from July to October, noting that the plan might be done in a staged process that lasts until 2021.

Meanwhile, the European Commission said it will revive talks at the European level if there is no agreement at the OECD this year. According to the commission, digital companies pay on average an effective tax rate of 9.5 percent in the EU compared to 23.2 percent for traditional businesses. Tech giants insist they pay as much tax as they are legally obliged to.

The EU has been accusing Big Tech of making money from European countries’ economies, using their complex structure to route some of the profits to low-tax member states. The EU Competition Commissioner Margrethe Vestager has been tasked with coming up with a “fair European tax” by the end of 2020 in case global efforts to reform digital taxation don’t make progress.

Experts say that taxing digital companies could move forward in other parts of the world too.

“Over a longer time-horizon, we see other countries beginning to explore digital goods and services taxes, particularly as the scale of the shift to digital commerce over the past several months of COVID-related dislocations becomes clear, and as a number of countries grasp to find new revenue,” Livingston noted.