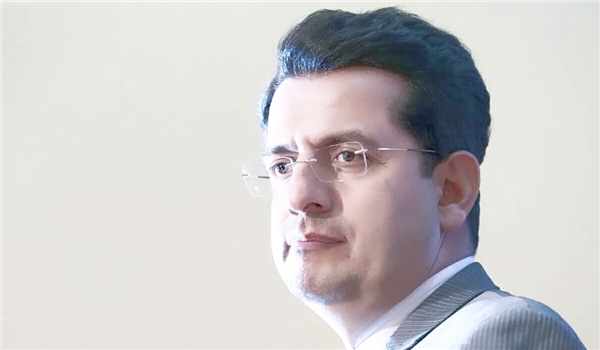 Mousavi said that the allegations just pursue psychological warfare and pressure as the American statesmen have no authority in terms of politics, legality and morality for judging other nations.

In reaction to a recent unfounded report by the US State Department, the spokesman added that the so-called report is “a false accusation that has never been substantiated and has been made by those who have been meddling in at least 55 sovereign countries.”

The US should reconsider its own black history, he said, adding, the US State Department boasts of lying as a determining factor for advancement of its purposes.

“The US has a long and ugly list of terrorist and anti-human crimes,” the diplomat pointed out.

He noted that American statesmen should search for “Targeted killing”, “Political Assassinations” and “Extrajudicial Execution” to see which country has applied the "novel techniques for killing innocent people."

“Non-interference in the affairs of other countries, maintenance of territorial integrity and showing respect for the national sovereignty of other countries are among clear and unchangeable principles of the Islamic Republic of Iran’s foreign policy,” Mousavi said on Sunday.

“Therefore, while emphasizing the importance of respect for the principle of the ‘united China’, the Islamic Republic of Iran condemns any foreign interference in the internal affairs of the People’s Republic of China and any harm to this country’s national sovereignty and territorial integrity, and underlines the need for ... keeping order to ensure stability, welfare and security of the people of Hong Kong,” he said.

Hong Kong was witnessing a renewal of protests on Sunday over a newly-proposed security law as a lockdown imposed over the coronavirus outbreak gradually loosens.

The proposed law was recently submitted for deliberation to the National People’s Congress (NPC) and it aims to boost security measures and safeguard national security in the Hong Kong Special Administrative Region (HKSAR) after violent protests rocked the region for months last year.

White House National Security Adviser Robert O'Brien warned on Sunday that China's proposed national security legislation for Hong Kong could lead to US sanctions and threaten the city's status as a financial hub.

"It looks like, with this national security law, they're going to basically take over Hong Kong and if they do ... Secretary (of State Mike) Pompeo will likely be unable to certify that Hong Kong maintains a high degree of autonomy and if that happens, there will be sanctions that will be imposed on Hong Kong and China," O'Brien said.

Chinese Foreign Minister Wang Yi said on Sunday that Hong Kong was an internal affair and no foreign interference would be allowed.

“Aside from the devastation caused by the novel coronavirus, there is also a political virus spreading through the US,” Wang said, adding, “This political virus is the use of every opportunity to attack and smear China. Some politicians completely disregard basic facts and have fabricated too many lies targeting China, and plotted too many conspiracies.”