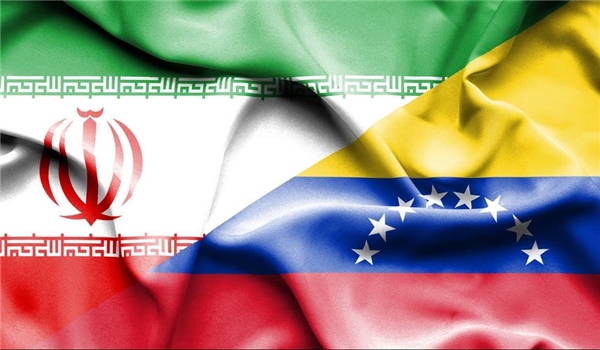 TEHRAN (FNA)- Iranian envoy in Caracas Hojatollah Soltani said friendship and brotherhood ties between Tehran and Caracas have increased as the country’s first oil tanker has arrived in Venezuelan waters.

“Two leaders, two countries, two revolutions whose hearts are together,” Soltani tweeted on Sunday beside a picture of Ayatollah Khamenei and the late Venezuelan leader Hugo Chavez.

“The first Iranian fuel tanker arrived in Venezuela; Venezuelan defense ministry, thank you for escorting the tankers,” he added.

In another tweet, he wrote, “Affection was replied by affection. In 2008 Venezuela, under Commander Chavez transferred gasoline to Iran which was under sanctions; and today, the Iranian people under the leadership of Imam Khamenei have dispatched gasoline-loaded tankers to the land of heroes, Venezuela.”

Earlier on Sunday, the first of five Iranian oil tankers has entered the Venezuelan territorial waters to show Iran’s determination to carry out exports of goods and oil to everywhere in the world regardless of US threats.

According to the online tracking data, the Iranian-flagged tanker, named Fortune, arrived in the Venezuelan exclusive economic zone (EEZ) on Saturday evening.

Based on media reports, upon entering the Venezuelan waters, the ship was closely followed by a US cargo ship, the Adam Joseph.

Four other tankers - the Clavel, the Forest, the Faxon and the Petunia – follow the Iranian tanker 'Fortune' all en route to Venezuela’s shores.

The tankers are carrying a total of 1.53 million barrels of gasoline to Venezuela, according to both governments, sources and calculations by TankerTrackers.com.

The hashtag #GraciasIran [Thank you, Iran] has been tweeted to mark the arrival of Iran’s tankers, with netizens hailing the cooperation between Tehran and Caracas in defiance of the US fuss to block the flow of oil from Iran to Venezuela.

Although Venezuela owns the largest proven oil reserves in the world, it has been trying to cover its domestic supply needs, with its energy industry hit by cruel US sanctions.

Earlier on Friday, Iranian President Hassan Rouhani said his country is always entitled to defend its sovereignty and territorial integrity, and warned that if his country's oil tankers in the Caribbean or anywhere in the world get into trouble by the Americans, Tehran will definitely retaliate.