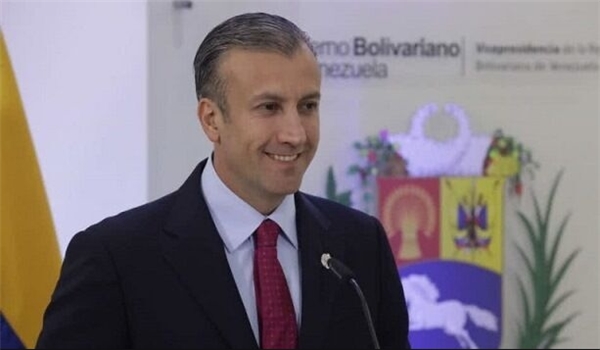 TEHRAN (FNA)- Venezuelan Oil Minister Tareck El Aissami in a message on Sunday appreciated Iran for its fuel supplies to that country, and said energy cooperation will develop relations in all fields.

"On behalf of @NicolasMaduro and of all Venezuelans we salute and welcome the ships of the Islamic Republic of Iran arriving at the ports of our Homeland. This energy cooperation aims at comprehensive development for the benefit of our peoples," El Aissami wrote on his Twitter account on Sunday.

"The energy cooperation between Iran and Venezuela is based on the scientific exchange and the productive development of the hydrocarbon industry, in addition to the experience that unites us as OPEC countries. Thanks brothers!!," he added.

Meanwhile, Commanding Officer of the Strategic Command Operations of Venezuela Remigio Ceballos in a message said the National Bolivarian Armed Forces of Venezuela appreciates the solidarity of the Republic of Iran by assisting the country with help that materializes in ships with fuel, escorted by our Navy and our Bolivarian Aviation!

"Thanks to the diplomacy of peace led by our CJ Nicolas Maduro," he said referring to escorting Iranian oil tankers by Venezuelan Navy and the Bolivarian Aviation.

Earlier, The Venezuelan ambassador Samuel Moncada wrote in a letter to the United Nations secretary-general and the head of UN Security Council that his government had alerted the "threat of imminent use of military force by the United States” against the Iranian ships carrying fuel for the Caribbean country.

"The US officials have publicly admitted that they are exerting pressure on companies to refrain from supplying gasoline to Venezuela,” he added.

Moncada stressed that the US maintains a "maximum pressure” against Venezuela and Iran, which is a typical example of violating national sovereignty and international law.

He urged the UNSC to adopt the necessary measures so that the Trump Government puts an end to its "warmongering and criminal policies."

In relevant remarks on Saturday, Iranian President Hassan Rouhani said his country is always entitled to defend its sovereignty and territorial integrity, and warned that if his country's oil tankers in the Caribbean or anywhere in the world get into trouble by the Americans, Tehran will definitely retaliate.