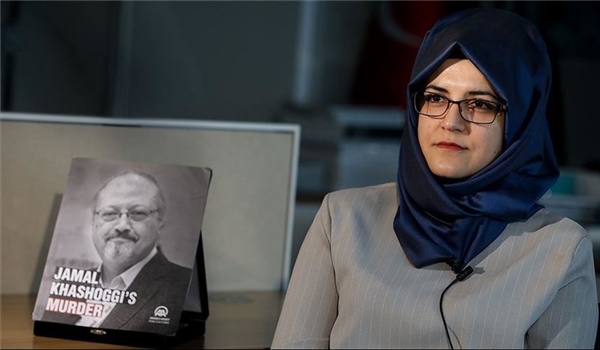 TEHRAN (FNA)- The fiancee of the slain Saudi dissident journalist Jamal Khashoggi rejected his family’s decision to forgive their father's murderers, saying, "No one has the right to pardon his killers.”

Hatice Cengiz, the Turkish fiancee of Khashoggi, made the comments after Salah, one of the late journalist’s sons, posted a brief statement on Twitter Friday, saying his family has pardoned those responsible for his father's murder, presstv reported.

"In this blessed night of the blessed month [of Ramadan], we remember God's saying: If a person forgives and makes reconciliation, his reward is due from Allah," he added, noting, "Therefore, we the sons of the Martyr Jamal Khashoggi announce that we pardon those who killed our father, seeking reward God almighty."

Cengiz took to Twitter, stating that Jamal Khashoggi had become "an international symbol bigger than any of us, admired and loved".

"Jamal was killed inside his country's consulate while getting the docs to complete our marriage. The killers came from Saudi with premeditation to lure, ambush [and] kill him," she added.

Cengiz further noted that the heinous murder does not have a statue of limitations, adding that she will not stop until justice is served.

Many leading Saudi activists shared the sentiment, stressing that Khashoggi's murder is a political issue rather than a familial one.

"The murder of Jamal Khashoggi is not a family case, it is not a mistake in a normal context," said Yahya Assiri, the head of the London-based Saudi rights group ALQST.

"The authorities killed him because of his political work," Assiri said, adding, "His case is political, so keep silent."

Under Islamic law, death sentences can be commuted if the victim's family pardons the perpetrator, but it is not clear whether that will apply in this case.

Activists argue that this applies to cases of family disputes or personal grievances, and not in a political case like Khashoggi's.

Some of them have also shared on social media a Saudi Supreme Court document from six years ago that said there can be no pardoning of perpetrators in homicide cases.

"The public prosecution's framing of the punishment [of Khashoggi's killers] as 'retribution' from the outset made it clear there was an intention to exonerate his murderers by way of a pardon from the family," Abdullah Alaoudh, a Saudi academic at Georgetown University, noted, adding, "Unfortunately, what happened was expected."

Khashoggi, a columnist for The Washington Post, who had become a critic of Saudi Crown Prince Mohammad bin Salman (MbS), was killed and his body dismembered by a Saudi hit squad after being lured into the Saudi consulate in Istanbul in October 2018.

Some Western governments, as well as the CIA, accused MbS of ordering the killing, an accusation that was initially rejected by Saudi officials. A year after the murder the crown prince accepted responsibility, stating, "It happened under my watch.”

While 31 suspects were linked to the killing, only 11 were put on trial in the capital city of Riyadh behind closed doors. Based on the court ruling, five people were sentenced to death, three to jail and the remaining three were exonerated.

The United Nations and rights groups condemned the trials as they failed to convict the masterminds behind the brutal killing.

However, Salah Khashoggi said of the verdict that "it has been fair to us and that justice has been achieved".

This is while Salah still lives in Saudi Arabia, and there are suspicions he has been coerced into issuing the pardon.

Khashoggi's fiancee believes this is all part of a cover-up by the Saudi authorities and that the true culprits are still at large and justice has yet to be served.