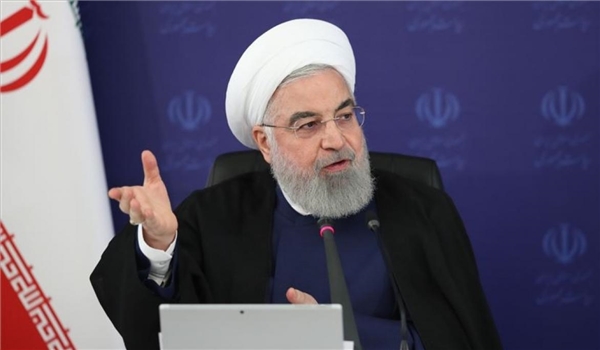 TEHRAN (FNA)- President Hassan Rouhani glorified the day of liberation of Khorramshahr city in the Iranian history, and said that the Iranian nation will not forget this day.

“It is an important day and the Iranian people always remember that day,” Rouhani said on Saturday.

He noted that after the liberation of Khorramshahr the Iranian nation proved that their resolve will overcome every obstacle even if the enemies possess the most advanced weapons.

Earlier in relevant remarks, Iranian First Vice-President Eshaq Jahangiri praised the nation's resistance at different junctures in time, stressing that unity and faith will turn every impossible into possible.

Jahangiri made the remarks through a twitter message on the occasion of the 38th anniversary of liberation of Khorramshahr during the 8-year war imposed by the US through Saddam of Iraq.

That unity turns the impossible into possible was a great lesson for all after the liberation of Khorramshahr, the vice-president stressed.

“Liberation of Khorramshahr breathed new life in the Iranian people,” he tweeted.

Last year, Commander of the Islamic Revolution Guards Corps (IRGC) Navy Rear Admiral Alireza Tangsiri, in a speech on the advent of the 37th anniversary of the liberation of Southwestern city of Khorramshahr from the military of former Iraqi dictator Saddam Hussain, reassured that Tehran is not after war but is fully prepared to defeat any aggression.

Referring to the hostile measures and belligerent plots of Washington against Tehran, Rear Admiral Tangsiri said enemies must know that his country is not advocating and after war but is fully ready. “The enemies cannot threaten us with death because we have vowed to continue the glorious path of our dear martyrs till the last body and the last breath.”

The commander reminded American military officials that once Iran liberated Khorramshahr it was barehanded while the enemy was at its height of readiness. He added that to counter the enemies today it is necessary to remind them of “this glorious history”.

He added that the armed forces of the country are fearlessly standing against the enemies regardless of the size and power of the enemy.

“The state of our power, capability and might today is beyond comparison with the past,” he underlined, adding that Iran started a defense development plan since the years of the Holy Defense (1980-88 when Saddam Hussain imposed a war on Iran), and improved its defensive capabilities to the level needed to counter “those countries which proclaim to be the best offensive and military power in the world”.

In a related front, Commander of Khatam ol-Anbia Headquarters Major General Gholam Ali Rashid underlined Iran's high deterrence power, saying that enemies do not dare to start a military conflict against the country.

"If today, the criminal America and its Western and regional allies do not dare to conduct a direct military confrontation against our country, it is due to the willingness of the people and the youth to resist and make sacrifices,” Major General Rashid said on the anniversary of the liberation of Khorramshahr.

He also described liberation of Khorramshahr as a symbol of national unity and a turning point in the history of Islamic Iran, which was achieved through the sacrifices of the men and women of the heroic Iran with God Almighty’s help.

In relevant remarks earlier this month, General Rashid underlined Iran's high preparedness to stand against aggressors, warning that any war against the country would damage the entire region.

"We do not welcome war in the region because it will definitely benefit the US and the Zionist regime but we are men of war and will stand against any aggression and will defeat it (the enemy) with God's help and warn that the costs of war will not be paid only by our nation," General Rashid said, addressing the Army Ground Force commanders in Tehran.

He underlined Iran's common interests with the neighboring countries in safeguarding regional stability, security and development, calling on them to desist from behaviors that serve the interests of the US and Israel which do not have any goal but sowing discord and war in the region.

"All the regional people should pay the costs of war in the region and it will harm common life in this region," General Rashid said.

Rear Admiral Tangsiri stressed that the armed forces of Iran have learned their lessons from the liberation of Khorramshahr, reassuring that the forces will defuse plots and conspiracies against Iran with heeding the  lessons in the time of making decisions.

He added that the armed forces, including the army and the IRGC, will go hand in hand unitedly under the auspicious and guiding of the Leader of the Islamic Revolution Ayatollah Seyed Ali Khamenei to foil any plots against the country.

TEHRAN (FNA)- Iranian President Hassan Rouhani and his French counterpart Emanuel Macron in phone talk on Wednesday discussed the latest developments in Lebanon after the last week explosion in Beirut as well as issues related to the nuclear deal.
﻿
﻿
Sections