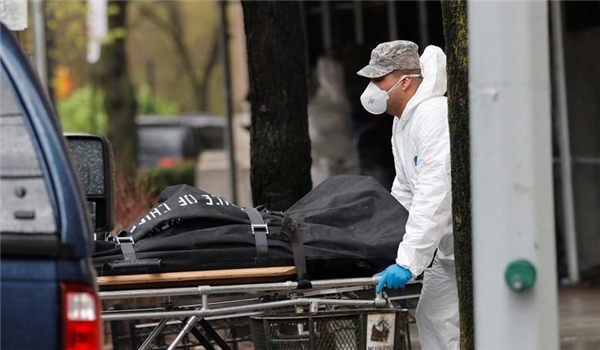 TEHRAN (FNA)- The novel coronavirus has killed more than 96,000 people in the United States, according to data from Johns Hopkins University released on Saturday.

The HJU's running tally found 96,007 fatalities linked to fatal virus, and nearly 1.6 million confirmed cases, as concerns over the real death toll being possibly much higher than the official US government numbers have also been recently voiced in mainstream media like The Washington Post and The New York Times.

The somber death toll and number of patients comes as US President Donald Trump continues to push for governors to reopen their states amid the virus devastating economic toll and with November's presidential elections rapidly approaching.

A new study suggested that the number of Americans who will die after contracting the novel coronavirus is likely to more than triple by the end of the year, even if current social distancing habits continue for months on end.

The United States is currently the nation hardest hit by the coronavirus, with the number of cases and deaths exceeding other nations by a very wide margin. The US economy lost at least 21.4 million jobs since the spread of COVID-19 forced thousands of businesses to close and lay off millions of workers. The unemployment rate spiked to post-Great Depression high of 14.7 percent and more than 38 million Americans have filed new claims for unemployment benefits, though economists say the damage is likely much deeper.

Over 5.2 million people around the world are now confirmed to have the coronavirus, according to data compiled by the Johns Hopkins University. More than 338,000 people have died globally while some two million people have recovered.