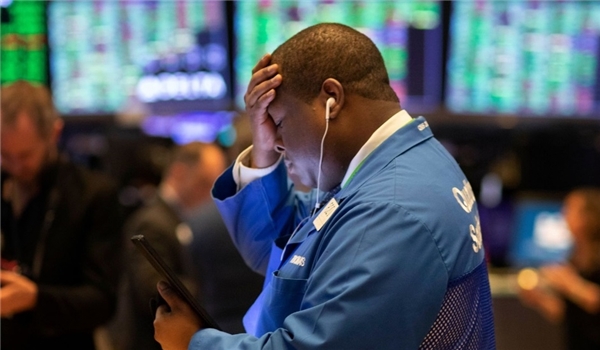 TEHRAN (FNA)- US stock futures fell early Friday morning after a decline in some major tech stocks, along with dismal employment data and rising tensions with China, pushed the market lower during regular trading.

The Dow fell just over 100 points earlier on Thursday while the S&P 500 and Nasdaq dropped 0.8% and nearly 1%, respectively. Amazon shares fell more than 2% after hitting a record high. Facebook also hit an all-time high, but closed below that level.

Weekly jobless claims rose by another 2.4 million last week, according to data released by the US Labor Department. That brings the total number of filings during the pandemic to more than 38 million. Continuing claims are also at a record.

Investors also fretted over US-China trade relations. Earlier in the week, the Senate passed a bill that would potentially delist Chinese stocks from US exchanges.

Ed Mills, Washington policy analyst at Raymond James, said the bill is moving at “warp speed”, noting, “We believe there will be a significant push for the legislation to be taken up in the coming weeks, and we believe it is only a matter of time before this bill (or something similar) is signed into law.”

Still, the major averages remained on pace for solid weekly gains. The Dow was up more than 3% week to date. The 30-stock Dow was headed for its biggest one-week gain since the week of April 9. The S&P 500 has gained 2.96% this week while the Nasdaq Composite is up 3% in that time.

Those weekly advances come amid optimism around the global economy reopening as well as rising hopes for a coronavirus vaccine.

“The future remains uncertain, and thus, we are not confident in saying a second wave cannot happen --- but the good news, there has yet to be a second wave in re-opened economies,” said Tom Lee, founder and head of research at Fundstrat Global Advisors, in a note, stating, “We remain in the half-full camp and believe stocks offer pretty good risk/reward, even here.”

The S&P 500 has skyrocketed more than 34% since hitting an intraday low on March 23, led in part by strong gains from major tech stocks.

To be sure, a CNBC analysis using data from Johns Hopkins University shows that as US states reopen, more than a third have seen new coronavirus cases rise.