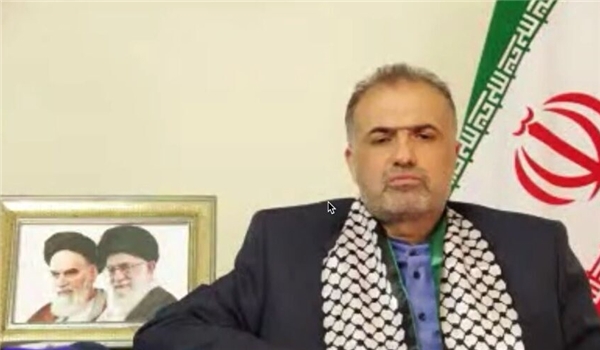 TEHRAN (FNA)- Iranian Ambassador to Russia Kazzem Jalali underlined that the resistance movement has prevented the Israeli regime from continuing its expansionist policies over the past two decades.

"The resistance against the Zionist regime has prevented the regime from implementing its occupying plans in regional states," Jalali said while addressing a video conference attended by Iranian, Russian, Kyrgyz and Azeri experts.

He reiterated that the issue of Palestine is significant from various angles, and said, "First it should be viewed from humanitarian perspective. A nation lived in its own land with a long history, but unfortunately it was occupied and the Palestinian people were tortured and killed."

Noting that the holy site belongs to Christians, Jews and Muslims, Jalali said that the catastrophe is that a regime has for years been struggling to destroy signs and monuments of the divine religions in the region.

"The this issue is that despite the fact that many have tried in the last 70 years to take initiatives to achieve peace and tranquility, Imam Khomeini's statements proven that peace and justice cannot be achieved with the Zionist regime," he said.

He described deal of century floated by US President Donald Trump as ridiculous.

Due to the outbreak of coronavirus in the world, the International Quds Day will be commemorated differently without holding gatherings and rallies in most countries.

TEHRAN (FNA)- Domestic abuse services are preparing for a “tsunami” of victims fleeing violent partners as the UK begins to ease its coronavirus lockdown, according to a report.
﻿
﻿
Sections