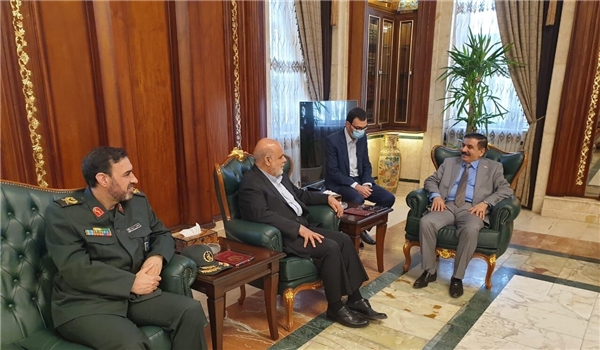 During the meeting in Baghdad on Wednesday, Anad appreciated Iran's efforts in fighting terrorism.

He said Iraq is ready to promote cooperation with Iran.

Masjedi, for his part, congratulated Anad for his election as defense minister of Iraq.

He also underlined Iran's readiness for developing relations with Iraq.

The Iranian ambassador noted that no efforts will be spared in line with having a powerful Iraq.

Today, the regional countries are facing many problems, he said, adding, "Bolstering all-out relations and cooperation between friends can be a way to overcome problems."

"The Islamic Republic of Iran stands by the Iraqi government and nation like before, and favors protecting Iraqi sovereignty and non-interference of foreign powers in the future of the country’s government and people," he noted.

Iraqi president, for his part, congratulated the arrival of Eid al-Fitr in advance, stressing the need for further development of relations and cooperation between the two countries.

Referring to the importance of Iran-Iraq political relations, he said, "The stability and security of Iraq require cooperation between friendly and neighboring countries, especially with the Islamic Republic of Iran."