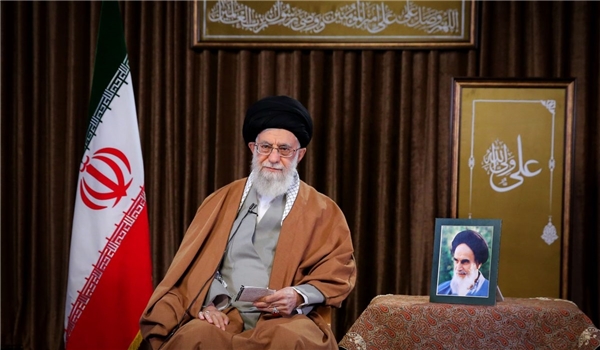 TEHRAN (FNA)- Supreme Leader of the Islamic Revolution Ayatollah Seyed Ali Khamenei underlined that speaking of elimination of the Zionist regime does not mean hostility towards the Jewish people.

“The Zionist regime has proven it won’t abide by any treaty and understands no logic except force. The nature of the Zionist regime is incompatible with peace, because the Zionists seek to expand their territories and will certainly not be limited to what they have already occupied,” the official twitter page of Ayatollah Khamenei wrote on Wednesday night.

“Eliminating the Zionist regime doesn’t mean eliminating Jews. We aren’t against Jews. It means abolishing the imposed regime and Muslim, Christian and Jewish Palestinians choose their own govt and expel thugs like Netanyahu,” it added.

This is “Eliminating Israel” and it will happen, Ayatollah Khamenei underlined.

He noted that a proposal for a referendum to choose the type of government for the historical country of Palestine was registered with the UN as offered by Iran, adding, “We say the true Palestinians with Palestinian roots of at least 100 years, and Palestinians living abroad, choose the govt of Palestine.”

We will support and assist any nation or any group anywhere who opposes and fights the Zionist regime, and we do not hesitate to say this,” Ayatollah Khamenei concluded.

His remarks came as the Iranian parliament in its meeting on Monday unanimously approved the generalities of a bill to confront the hostile acts of the Zionist regime against peace and security.

Earlier this month, an official with the Coordination Council of Islamic Propagation Organization said Ayatollah Khamenei will deliver a speech on the occasion of the International Quds Day corresponding with May 22.