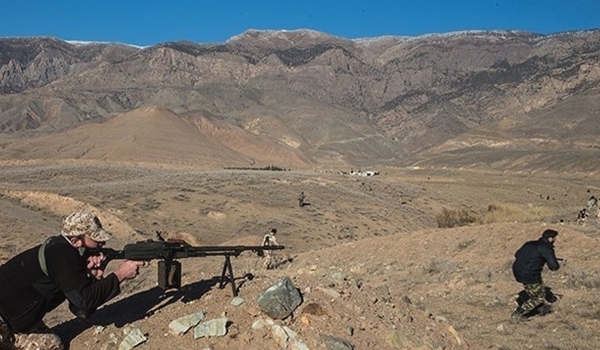 "The joint operation against an 8-member terrorist group was launched on Tuesday in Marivan general district and two of the terrorists were killed," IRGC announced in a statement on Tuesday night.

According to the statement, four of the terrorists were also wounded while the remaining two managed to escape using the darkness of the night.

On May 5, three members of Islamic Revolution guards corps' forces were martyred in a clash with counter-revolutionary terrorists in the general district of Divandere.

A number of anti-revolutionary terrorists were also killed in that clash.

Iran’s Western borders have been the scene of occasional terrorist groups' attacks.

In a relevant development in early May, Iranian security forces dismantled two terrorist groups at the bordering areas of the two Western provinces of West Azarbaijan and Kurdistan.

The intelligence ministry announced in a statement on Wednesday that its forces in West Azarbaijan and Kurdistan provinces have managed to monitor and eliminate two terrorist groups, affiliated with separatist groups, that had entered the country from neighboring countries to carry out acts of terrorism.

In a relevant development earlier in May, the Islamic Revolution Guards Corps (IRGC) launched a successful operation in Kurdistan province, West of Iran, and killed a number of terrorists who were planning to infiltrate the country from the region.

“Several terrorists were killed during clashes in Divandarreh County on Tuesday,” a statement by the IRGC’s Hamzeh Seyed al-Shohada Base said.