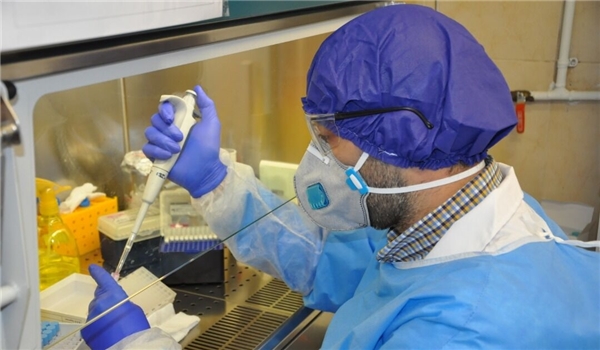 TEHRAN (FNA)- An official with Iranian Presidency announced on Tuesday that the country has become self-sufficient in manufacturing test kits and the surplus will be exported abroad as more countries demand for such items.

"Part of the mentioned figure is used inside the country and the rest is exported," he added.

Meanwhile, Head of Iran Nanotechnology Initiative Council (INIC) Saeed Sarkar said on Tuesday that the country’s researchers have produced a highly-efficient disinfecting solution which remains on the surface for 7 days to kill coronavirus and any other germs.

“Fortunately, at present, nearly 10 to 12 companies are producing nano-based disinfecting solutions which enjoy high durability and they remain on the surface from 12 hours to 7 days, depending on the company which produces them,” Sarkar told FNA.

He added that 200 tons of the nano-based disinfectants are produced in Iran every day.

Sarkar also announced the daily production of 250,000 N95 masks in Iran, noting that the country now enjoys the capacity to export the product to the European states.

“The European, neighboring and Southeast Asian states, including Indonesia, have demanded for our N95 masks and I hope that we can start exports of these masks to some of these countries,” Sarkar said.

The Iranian health ministry announced on Tuesday that 2,111 new cases of coronavirus infection have been identified in the country in the past 24 hours, noting that 10 provinces have reported no deaths from the disease.

He explained that 424 new patients were hospitalized and 1,687 others were outpatients.

“In the past 24 hours, 10 provinces reported zero deaths and 6 provinces had 1 death each,” Jahanpour said, adding that Khuzestan province in Southern Iran is a red zone now considering the increasing number of infection to COVID-19 virus but other provinces enjoy relatively sustainable situation.

The coronavirus COVID-19 is affecting approximately all countries and territories around the world. The virus was first reported in the central Chinese city of Wuhan late last year. It has so far killed more than 320,400 people and infected over 4.9 million others globally.