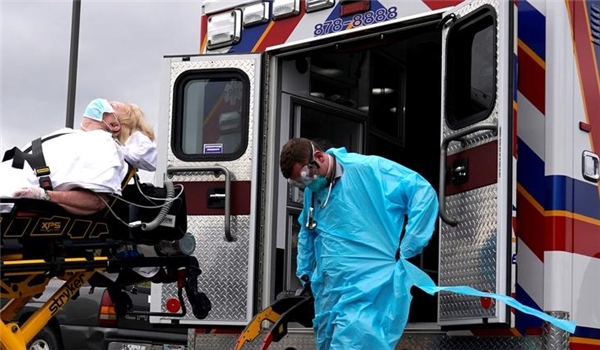 TEHRAN (FNA)- The COVID-19 death toll in the US surpassed 90,000 people as of Tuesday, according to Johns Hopkins University, as the country, the epicenter of the pandemic, has more than 1.5 million confirmed cases of the fatal virus.

Some 1,509,000 coronavirus cases have been confirmed in the United States as of Tuesday, JHU’s coronavirus resource center reported, while a total of 90,370 people have died with the virus - more than a quarter of the global casualty count.

The grim milestones came as US President Donald Trump tweeted to "REOPEN OUR COUNTRY!" and the White House attempted to shift blame, including onto its own scientists, for the high number of deaths. Members of the US administration have disagreed on whether the Centers for Disease Control and Prevention (CDC) let the country down with testing efforts.

Many states are slowly beginning to reverse their economic shutdowns after a grueling two-month lockdown. While a handful of sparsely-populated states managed to avoid lockdown entirely, others - including New York and California - remain largely shuttered.

The United States faces the "darkest winter in modern history" unless leaders act decisively to prevent a rebound of the coronavirus, according to a government whistle-blower who alleges he was removed from his job for warning the administration to prepare for the pandemic.

His assessment cited 12 different models tracked by his agency and marked the first time Redfield has explicitly addressed the grim milestone of 100,000 deaths, even as the Trump administration turns its strategy toward reopening the economy.

Trump has falsely claimed the numbers surrounding coronavirus cases in the United States were “going down almost everywhere” — despite easily verifiable data showing an increase in new infections nationwide.

Dr. Anthony Fauci has also stated the real number of fatalities from the novel coronavirus in US is "almost certainly" even higher than the official death toll because of the likelihood that some deaths went unrecorded.

The United States is currently the nation hardest hit by the coronavirus, with the number of cases and deaths exceeding other nations by a very wide margin. The US economy lost at least 21.4 million jobs since the spread of COVID-19 forced thousands of businesses to close and lay off millions of workers. The unemployment rate spiked to post-Great Depression high of 14.7 percent and more than 36 million Americans have filed new claims for unemployment benefits, though economists say the damage is likely much deeper.

The virus pandemic continues to spread around the globe, infecting almost 4.8 million people worldwide, and killing at least 318,500, according to Johns Hopkins University. However, multiple countries have reported a decline in the number of new cases, announcing an ease of the coronavirus restrictions or even lifting lockdowns and travel bans.