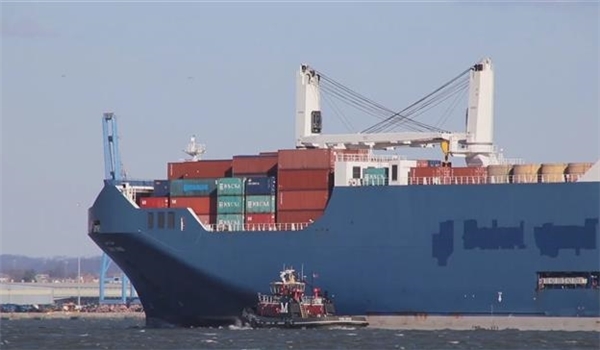 TEHRAN (FNA)- The vast presence of the US cargo vessels in international waters from the Persian Gulf to the Indian Ocean is a main leverage against Washington requiring the White House to think twice before taking hostile action against the Iranian oil tankers in the Caribbean.

Iran on Sunday summoned the Swiss ambassador whose embassy represents the US interests in Tehran, and Foreign Minister Mohammad Javad Zarif wrote a letter to the UN chief to warn of the consequences of any US wrong move against the Iranian tankers on a voyage to the western hemisphere.

Nour News website, close to Iran’s Supreme National Security Council (SNSC), wrote that in addition to the Iranian political officials’ warning against the US piracy, one of the most important deterrents can be the vast presence of the American cargo ships in the international waters of the Persian Gulf, the Sea of Oman, the Indian Ocean and the Red Sea and the Islamic Republic’s extensive capacities for retaliation.

It added that Iran’s political warning, given the previous experiences, will certainly be followed by increased control on shipping in the nearby and faraway waters and more preparedness to give a proper response to different possibilities.

Zarif sent a letter to UN Secretary-General Antonio Guterres to caution over likely US menace against Iranian oil tankers in the Caribbean, stressing that America would be responsible for ensuing consequences.

On Sunday, Iranian Government Spokesman Ali Rabiyee blasted the US interference in trade exchange between Iran and Venezuela, and stressed that Iran will not hesitate to sell its oil.

He pointed to some rumors spread in the recent weeks on the trade exchanges between Tehran and Caracas, and added, “Iran sells goods to Venezuela and buys goods in exchange. This trade is none of anybody’s business.”