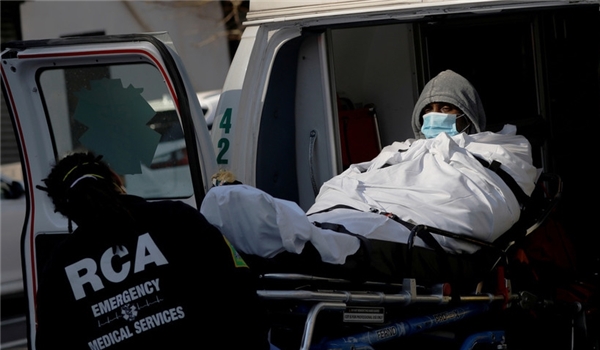 TEHRAN (FNA)- Dr. Anthony Fauci stated the real number of fatalities from the novel coronavirus in US is "almost certainly" even higher than the official death toll because of the likelihood that some deaths went unrecorded.

The director of the National Institute of Allergy and Infectious Diseases told the Senate Health Committee during a virtual hearing on Tuesday that with health care systems overwhelmed, it's very likely a number of deaths were not recorded, meaning total deaths from the coronavirus across the country are likely higher than the already staggering toll counted by Johns Hopkins University.

"Most of us feel that the number of deaths are likely higher than that number because given the situation particularly in New York City, when they were really strapped with a very serious challenge to their health care system, that there may have been people who died at home who were not counted as COVID because they never really got to the hospital," Fauci noted during the hearing.

Asked by Sen. Bernie Sanders if the real number of deaths could be even 50 percent higher than the official number of 80,000, Fauci said, "I think you are correct that the number is likely higher, I don't know exactly what percent higher, but almost certainly it's higher."

The US administration’s top infectious disease expert has also warned that the consequence of reopening the country too early could be "really serious" if states don't have the capability to respond to new coronavirus infections.

President Donald Trump falsely claimed the numbers surrounding coronavirus cases in the United States were “going down almost everywhere” in a tweet on Monday — despite easily verifiable data showing an increase in new infections nationwide.

The United States is currently the nation hardest hit by the coronavirus, with the number of cases and deaths exceeding other nations by a very wide margin. The virus pandemic has had a profound impact on the US economy, which experienced its sharpest decline in over a decade in the first three months of 2020. The total number of first-time filings for unemployment insurance has climbed to over 33.0 million over the past seven weeks of the forced lockdown due to the COVID-19 outbreak.

Globally, the death toll from the coronavirus has topped 292,000, on Wednesday, with more than 4,262,800 people infected worldwide, according to a tally maintained by Johns Hopkins University.