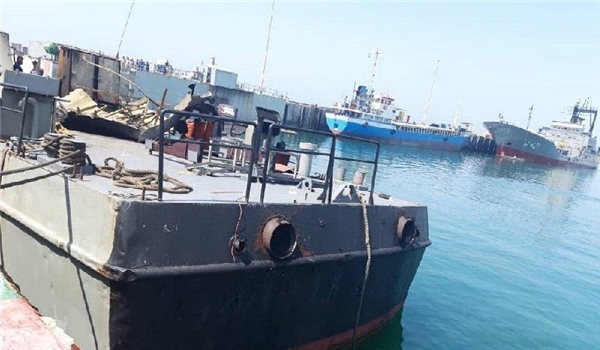 TEHRAN (FNA)- Nineteen Iranian navy men were martyred and 15 others injured in a fatal incident for the Iranian Army Navy’s Kenarak support vessel in the country’s waters near the Southern port of Jask in the Sea of Oman on Sunday.

The incident happened during the Iranian Navy drills on Sunday, the public relations office of Bandar Abbas First Naval Zone of the Navy reported early Monday.

The circumstances of the incident are currently undergoing technical examinations.

Meantime, Head of Iranshahr University of Medical Sciences Mohammad Mehran Amini Fard said on Monday that “unfortunately, one person has been martyred on the scene and 15 other forces have been injured in the incident and transferred to Imam Ali (AS) hospital in Chabahar”.

He added that 2 of the wounded forces were outpatients, 2 others underwent medical operations and are now kept in the ICU and 11 others are in stable conditions and kept at the hospital.

But hours later, the Navy's public relations declared in a statement that 19 Navy personnel have been martyred and 15 injured, adding that rescue teams were quickly deployed to the site where they evacuated the wounded.

The Navy said the vessel has been towed to the port for further investigations.

Kenarak logistical and support vessel is a Hendijan-class ship purchased from the Netherland during the Pahlavi regime over 4 decades ago. The vessel is armed with a 20mm-caliber cannon and 4 Nour Anti-Ship Cruise missile launchers. The ship is also used for naval surveillance and reconnaissance missions as it has also been equipped with mine-laying capability and drone launchers.

The Iranian Navy transferred its main headquarters from the capital city of Tehran to the port city of Bandar Abbas, on the shores of the Persian Gulf waters, in November.