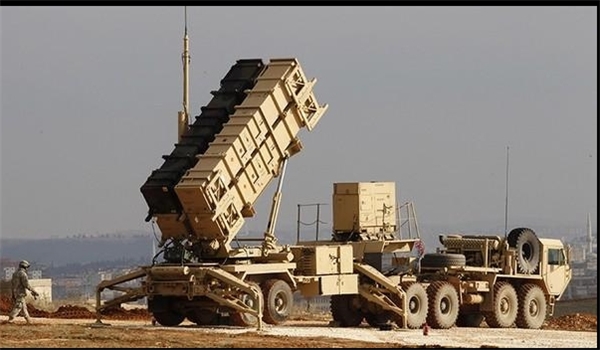 TEHRAN (FNA)- A prominent Iraqi security expert warned of the US plot to transfer its Patriot air defense missile systems from Saudi Arabia to its bases in the Iraqi Kurdistan region and Kirkuk.

Amir Abdol Mona’am told the Arabic-language al-Ma’aloumeh news website that the US might transfer the Patriot shields from Saudi Arabia to Iraq to support the ISIL terrorists against the Iraqi security and Hashd al-Shaabi (popular) forces.

He added that the US is attempting to strengthen its presence in Iraq.

“The US has started implementation of a new plan with focus on the military bases which are not in range of the resistance forces and it is expected that the Patriot system will be transferred from Saudi Arabia to Kirkuk or the Iraqi Kurdistan region or be used on mobile platforms in regions where terrorists are stationed,” Abdol Mona’am said.

In relevant remarks in April, a member of the Iraqi parliament’s security and defence committee condemned deployment of Patriot missile defence systems at bases hosting US forces in the country, saying they are a breach of Iraq’s sovereignty.

“The decision about the withdrawal of foreign forces, including US troops, is not reversible as it represents the Iraqi nation’s will to respond to Washington’s crimes in Iraq, its flagrant intervention in the country’s domestic affairs in addition to its repeated targeting of Hashd Al-Shaabi forces and its leaders,” Karim Alawi told Al-Ma’alomeh.

“According to the available information, the US-built Patriot missile was installed in three military bases where American forces are stationed. This runs counter to the sovereignty of Iraq,” he explained.