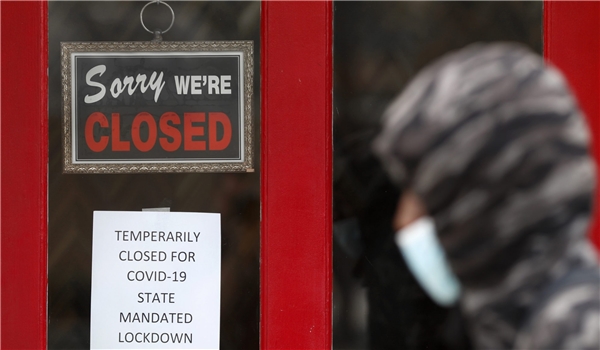 TEHRAN (FNA)- The US Bureau of Labor Statistics (BLS) reported on Friday that the coronavirus shutdown has slashed a record number of jobs from nonfarm payrolls, sending the unemployment rate to record highs.

The United States lost 20.5 million jobs in April amid the economic devastation of the coronavirus pandemic as the steepest recorded surge in American unemployment nearly wiped out a decade of job gains, according to data released by the BLS.

After the US was hit by the COVID-19, the unemployment rate skyrocketed from 3.5 percent in February to 4.4 percent in March and to nearly 15 percent in April.

April’s staggering job losses also shattered records for both the largest one-month decline in jobs — roughly 2 million in September 1945 — and the highest level of unemployment ever recorded by the BLS, 10.8 percent in November 1982.

The jobs lost in April alone are almost 2.5 times the 8.7 million jobs lost during the Great Recession and nearly equal to the 22.4 million jobs gained in the decade of recovery that followed.

According to the BLS report, leisure and hospitality saw some of the steepest job losses, amounting to 7.7 million jobs. Food and beverage stores lost 42,000 jobs. Education and health services cut 2.5 million workers, while professional and business services, as well as retail, both saw a loss of 2.1 million employees. Manufacturing and other services fell by 1.1 million jobs each, and government jobs nosedived by 980,000. The construction industry cut 975,000 employees, and the transportation and warehousing sector was down by 584,000 jobs.

The total employment level of 133.4 million has sunk to its lowest since June 1999.

As the US tops the list of the coronavirus affected nations worldwide, the number of COVID-19 cases across the country exceeded 1,284,000 on Saturday. At least 77,180 people succumbed to the fatal virus, according to data collected by Johns Hopkins University.

The new forecast from the University of Washington's Institute for Health Metrics and Evaluation (IHME) reflect "rising mobility in most US states" with an easing of business closures and stay-at-home orders expected in 31 states within days, according to the institute.

Researchers had projected that the US may have to endure social distancing measures --- such as stay-at-home orders and school closures --- until 2022. It is, unless, a vaccine becomes quickly available, according to researchers from the Harvard T.H. Chan School of Public Health, who published their findings in the journal Science. The findings directly contradict research being touted by the White House that suggests the pandemic may stop this summer.

The New York Times has also reported that the administration of President Donald Trump is projecting that the rate of US deaths from the novel coronavirus will rise by almost one third to 3,000 per day by the beginning of June with 200,000 new cases per day occurring.

The United States is currently the nation hardest hit by the coronavirus, with the number of cases and deaths exceeding other nations by a very wide margin. The virus pandemic has had a profound impact on the US economy, which experienced its sharpest decline in over a decade in the first three months of 2020. The total number of first-time filings for unemployment insurance has climbed to over 33.0 million over the past seven weeks of the forced lockdown due to the COVID-19 outbreak.

Globally, the death toll from the coronavirus has topped 275,000, on Saturday, with more than 3,939,000 people infected worldwide, according to a tally maintained by Johns Hopkins University.