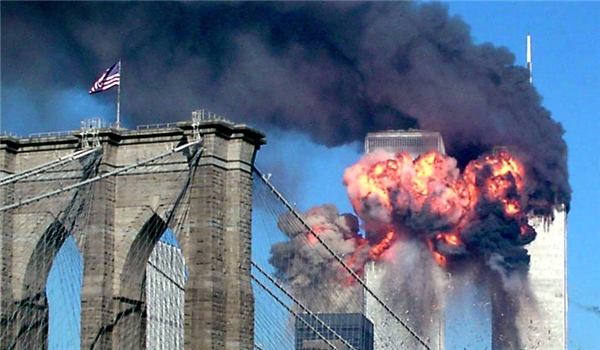 TEHRAN (FNA)- President Donald Trump stated the coronavirus pandemic has been worse for the United States than Pearl Harbor and 9/11 as the fatal virus continues to claim more victims in the worst hit country.

Trump said fallout from the pandemic has hit the United States harder than the December 1941 Japanese bombing of Pearl Harbor or the September 2001 terror attacks on New York and Washington.

"This is really the worst attack we've ever had," Trump told reporters at the White House on Wednesday, adding that "this is worse than Pearl Harbor. This is worse than the World Trade Center".

The surprise Japanese attack on the Pearl Harbor Naval Base in Hawaii drew the United States into World War II. The 9/11 terrorist attacks killed about 3,000 people and wounded 25,000 others, triggering two decades of US war in Iraq, Afghanistan and military intervention in other countries.

The United States, with the world's third-largest population, has registered at least 1,228,600 confirmed cases of the deadly virus, more than five times more than any other country. Coronavirus deaths in the United States has risen to 73,430 as of Thursday.

Contradicting reality, his own top experts, and America's top infectious diseases officials, Trump claims for months that the virus is under "tremendous" control and downplays the coronavirus impact, amid calls for a stronger federal response against the fatal illness.

But, in recent weeks, the first man in the White House has radically changed his assessment of the threat posed by the the COVID-19. Expecting many thousands of American death from the sickness, Trump has said 100,000 or fewer deaths in the US would constitute a “very good job” - a remark which left questions about whether he's doing what's best for the country or what's best for him, and what kind of person credits himself for death of 100,000-plus civilians.

On Tuesday, the American leader warned that “there’ll be more death” related to the coronavirus pandemic as a growing number of states move to slowly relax their stay-at-home mandates in the coming months.

Trump, who has come under consistent scrutiny for his own slow response to the virus domestically, has repeatedly accused China of covering up the coronavirus outbreak and claimed there is significant evidence that the virus emanated from a Wuhan lab — though has not actually provided any evidence. Both the lab and Beijing have denied such unproven accusations by American officials, specifically Secretary of State Mike Pompeo.

The new forecast from the University of Washington's Institute for Health Metrics and Evaluation (IHME) reflect "rising mobility in most US states" with an easing of business closures and stay-at-home orders expected in 31 states within days, according to the institute.

Researchers had projected that the US may have to endure social distancing measures --- such as stay-at-home orders and school closures --- until 2022. It is, unless, a vaccine becomes quickly available, according to researchers from the Harvard T.H. Chan School of Public Health, who published their findings in the journal Science. The findings directly contradict research being touted by the White House that suggests the pandemic may stop this summer.

The New York Times has also reported that the Trump administration is projecting that the rate of US deaths from the novel coronavirus will rise by almost one third to 3,000 per day by the beginning of June with 200,000 new cases per day occurring.

The United States is currently the nation hardest hit by the coronavirus, with the number of cases and deaths exceeding other nations by a very wide margin. The virus pandemic has had a profound impact on the US economy, which experienced its sharpest decline in over a decade in the first three months of 2020. The total number of first-time filings for unemployment insurance has climbed to 30.3 million over the past six weeks of the forced lockdown due to the COVID-19 outbreak.

Globally, the death toll from the coronavirus has topped 263,980, on Thursday, with more than 3,766,400 people infected worldwide, according to a tally maintained by Johns Hopkins University.