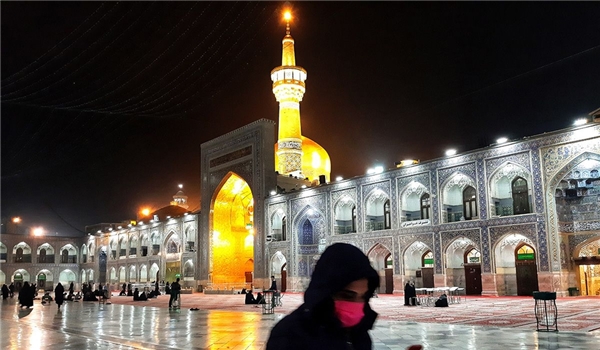 TEHRAN (FNA)- An official announced that religious sites reopened and resumed activities in 132 Iranian cities as the restrictions aimed at containing coronavirus disease are gradually reduced.

Mohammad Norouzpour, an official with Iran’s Endowments and Charity Affairs Organization said that restrictions have been eased in these cities due to improvement of health conditions.

Norouzpour added that although religious sites are open, pilgrims should observe hygiene instructions including social distancing.

All the pilgrims’ health conditions will be tested and anyone diagnosed with COVID-19 infection will get medical treatments, he added.

Religious sites had been locked down in Iran since two months ago following the coronavirus outbreak.

Iranian Health Ministry Spokesman Kianoush Jahanpour announced on Tuesday that 1,323 new cases of coronavirus infection have been diagnosed in the country in the past 24 hours, noting that 60% of them are outpatients.

1,323 more patients infected with COVID-19 virus have been identified in the country since yesterday, Jahanpour said on Tuesday.

“60% of them have been outpatients and 40% have been hospitalized,” he added.

He added that the number of coronavirus patients in the country has increased to 99,970 people.

Jahanpour said that 6,340 people have lost their lives due to infection to the virus, including 63 in the past 24 hours.

He, meantime, stated that 80,475 infected people have recovered and been discharged from hospital, expressing concern that 2,685 patients infected with COVID-19 virus are in critical conditions.

The coronavirus COVID-19 is affecting approximately all countries and territories around the world. The virus was first reported in the central Chinese city of Wuhan late last year. It has so far killed more than 252,500 people and infected over 3.6 million others globally.