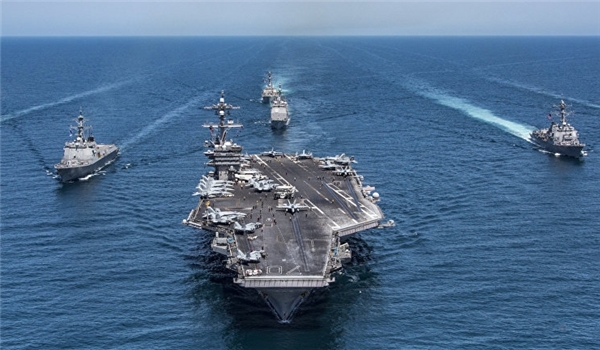 TEHRAN (FNA)- Iranian Foreign Ministry Spokesman Seyed Abbas Mousavi rapped the US for illegal presence in the region, saying that Washington should withdraw from the region.

“Principally, we do not recognize the Americans’ presence, specially, their military presence in the Persian Gulf region, ad consider it as illegal and against the stability and security in the region,” Mousavi told reporters in Tehran on Monday.

He said that in some cases, the American warships deployed in the Persian Gulf have prevented the free and legal voyage of the Iranian forces patrolling the region and have received warnings from Iran.

“The unjustified and illegal presence of Americans distorts the freedom of shipping and regional stability and security,” Mousavi said.

“The Americans have certainly experienced that if they make the slightest move and aggression against the Islamic Republic’s territorial waters and our people’s interests, they will be slapped in the face stronger than the past because we do not joke with anyone in defending our country,” General Shekarchi said in an interview with the state TV.

General Shekarchi said that the regional states are themselves able to establish security in the region, and asked, “What are the Americans after in this region and what do their warships, fighters and combat units do in this region?”

The IRGC last month strongly rejected the Pentagon's recent claims about the harassment of the US naval forces by the IRGC boats in the Persian Gulf as a "Hollywood" story, and further warned against the US Navy’s new “unprofessional and dangerous” moves in the waterway.