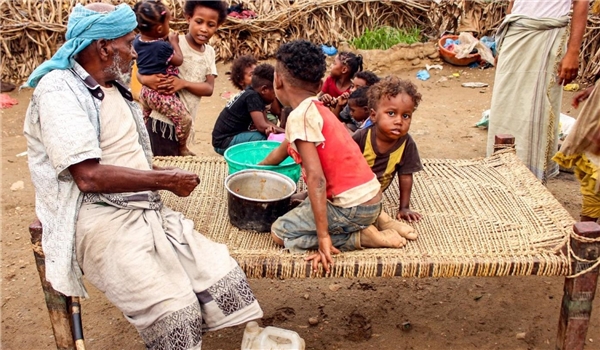 TEHRAN (FNA)- No one has been safe in Yemen since the Saudis and their partners from the UAE to their Western arms suppliers raided the poor nation more than 5 years ago, but if the international community allows the Riyadh-led coalition to continue the aggression, the war-ravaged nation would experience a much worse rate of fatalities because of the COVID-19 outbreak.

The world is now getting a glimpse of the reality civilians have faced in Yemen for the past five years since the illegal war began: life-threatening illness, deepening economic pressure, fewer and worse options for parents and caregivers.

Millions now live in overcrowded shelters, without safe water, proper nutrition or proper health care. The basic steps others are taking to curtail the spread of COVID-19 are virtually impossible in Yemen. Should it take hold, the results would be unthinkable.

The health crisis won’t just threaten the well-being of the afflicted; its impacts would ripple widely across families and societies. Civilians would find themselves defenseless against even basic maladies like diphtheria and cholera.

The Saudi-led coalition to this on-going fighting since 2015 has damaged or destroyed more than half of Yemen’s hospitals and other health facilities through bombing and shelling. The airstrikes have destroyed water and sanitation infrastructure in an already water-poor country, leaving more than two-thirds of the country with only unsafe water to drink.

As a result, Yemen now has the unenviable distinction of having experienced the world’s worst diphtheria outbreak in years and the largest cholera outbreak ever recorded. Even when it comes to critical patients who can be saved, this protracting war has shown no mercy. Tens of thousands of Yemenis with life-threatening conditions have nowhere to go to seek medical treatment.

The Saudi-led coalition has shut down commercial air traffic in and out of Sana’a. Millions of Yemenis have already been forced from their homes, some of them multiple times to escape violence or pursue scarce opportunities for work. But even basic sanitation and health care in camps for displaced people are unavailable.

Even with a massive aid response, as the conflict continues, people are fighting a rising tide. It goes without saying that in these cramped quarters, where social distancing is a fanciful notion and suppressed immunity the norm, a single infection would lead to countless deaths. The coronavirus epidemic would write new stories of suffering in Yemen.

In its World Report, Human Rights Watch said the Saudi Arabia-led coalition has carried out military operations, supported by the United States and United Kingdom, against Ansarullah forces and Yemeni army since March 2015. The coalition has unlawfully attacked homes, markets, hospitals, schools, civilian businesses and mosques.

This is to say that the conflict in Yemen must end before it claims any more lives aid the COVID-19 pandemic. Saudi and American military and political leaders have shown too often these past five years that they are not willing to make even small compromises for the sake of people. And the international community, so far, has failed to muster the resolve to force the Saudi-led coalition to stop attacks in respect for the very few ceasefires that have been declared in the country in quest for a political settlement that can bring the life-saving peace that Yemen’s people demand, even now that almost all experts across the spectrum acknowledge that the Saudis and their UAE companions have lost the war in practice. Some even now believe that the Saudis and the UAE have stayed adamant to peace calls to keep the Yemeni nation under pressure during the coronavirus pandemic that has just picked up pace in the Arab state in a bid to increase the death toll in revenge for their humiliating military defeat.

With coronavirus spreading fast everywhere, Yemen needs humanitarian aid to restore its health systems, tackle the diseases currently ravaging its people, and prevent a new catastrophe. They cannot afford to wait for the COVID-19 peak.

The Saudis and their partners seem not to fear being held to account for violating the laws of war. The United Nations needs to press them to end the slaughter and the suffering of civilians. Western weapons suppliers, including the US, should also be forced to stop supplying arms to the Saudi-led coalition in Yemen and should definitely be held to account for committing or facilitating serious violations of international humanitarian and human rights law.