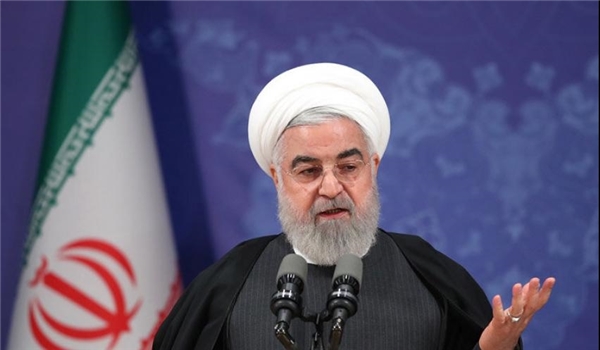 TEHRAN (FNA)- Iranian President Hassan Rouhani said that all the world states and organizations have deplored the US sanctions which hinder Iran’s efforts in the fight against coronavirus.

“Today, everyone firmly condemns the US sanctions,” President Rouhani said, addressing a meeting of the National coronavirus campaign headquarters in Tehran on Sunday.

Elsewhere, he referred to the change that has occurred in policies of different world countries, including the EU members, after the coronavirus outbreak, and said, “Now, you see that in a world where they claimed the only way to live is standing united, all of them have gone towards nationalism and two countries which are seemingly friends, compete over receiving masks. Even in the EU, every country was thinking of itself and the global policies were questioned clearly.”

President Rouhani said that the countries which have relied on oil exports or tourism have faced problems after the coronavirus epidemic, stressing that fortunately Iran is not a one-dimensional country.

He also noted that Iran treats the foreign nationals who live in the country and have been infected with coronavirus freely, and blasted the US for its racial practice in dealing with the disease. “The US differentiates between the blacks and whites and the foreign nationals (when treating patients).”

The Iranian health ministry announced on Saturday that 802 new cases of coronavirus infection have been diagnosed in the country in the past 24 hours, noting that over 77,300 patients have recovered so far.

“802 more patients infected with COVID-19 virus have been identified in the country since yesterday based on confirmed diagnosis criteria,” Health Ministry Spokesman Kianoush Jahanpour said on Saturday.

He added that the number of coronavirus patients in the country has increased to 96,448 people.

Jahanpour said that 6,156 people have lost their lives due to infection to the virus, including 65 in the past 24 hours.

He, meantime, stated that 77,350 infected people have recovered and been discharged from hospital, expressing concern that 2,787 patients infected with COVID-19 virus are in critical conditions.

Jahanpour also noted that 484,541 coronavirus diagnosis tests have been carried out in the country so far.

The coronavirus COVID-19 is affecting approximately all countries and territories around the world. The virus was first reported in the central Chinese city of Wuhan late last year. It has so far killed more than 244,800 people and infected over 3.49 million others globally.