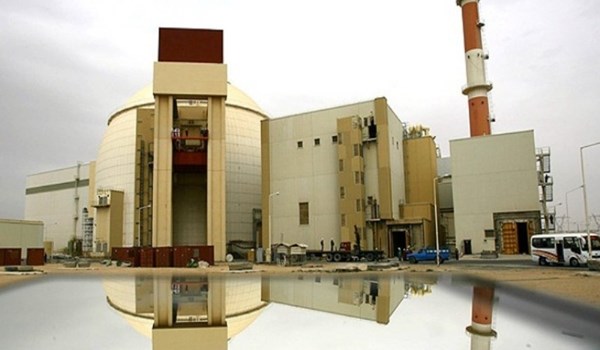 TEHRAN (FNA)- Iran delivered a new batch of nuclear fuel to the Bushehr power plant in the Southern parts of the country.

A new batch of nuclear fuel has been delivered to the Bushehr nuclear power plant in Iran, the Atomic Energy Organization of Iran (AEOI) said on Wednesday.

It added that the new batch was delivered based on the schedule of the Iranian and Russian side for the power plant’s annual refuelling.

Meantime, the Russian Embassy said in a tweet on Wednesday that, “thanks to efforts of the Atomic Energy Organization of Iran, [Russian nuclear corporation] Rosatom and the Russian Foreign Ministry, a new batch of nuclear fuel was delivered to the Bushehr NPP. It was necessary for further functioning of the reactor".

On April 12, a deputy head of Iran's atomic agency, Mahmoud Jafari, announced that Bushehr’s Unit 1 will be temporarily shut down for refuelling and technical maintenance in the run-up to the peak season in summer.

In 2014, Russia signed a cooperation contract with Iran to help build the second and third Bushehr reactors, which are scheduled for launch in 2024 and 2026, respectively.

The Bushehr facility sits 17 kilometres Southeast of the city of Bushehr along the Persian Gulf coast in Southwestern Iran.

The power plant started operating in 2011 and reached its full capacity the following year.