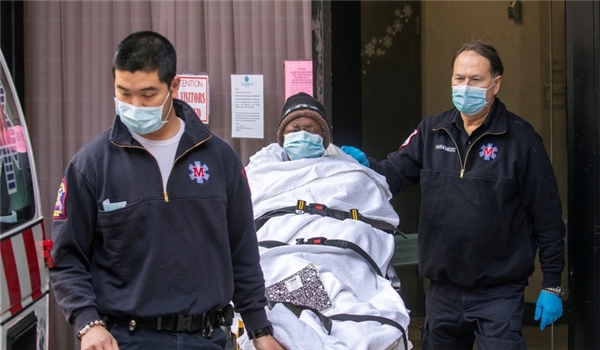 TEHRAN (FNA)- The COVID-19 death toll in the United States closed 61,000, according to Johns Hopkins University, as the US federal government has ordered 100,000 new body bogs amid to prepare for the “worst-case” scenario.

The United States accounts for roughly a quarter of the global deaths related to COVID-19, according to the Johns Hopkins data citing reported figures, as almost 61,000 Americans have lost their lives due to the illness.

US President Donald Trump has stated that the federal government will not be extending its coronavirus social distancing guidelines once they expire on Thursday, even as the virus death toll is rising.

More than 1,040,400 Americans have tested positive for the sickness, as the US has more virus infections than the next five countries combined.

The US federal government has ordered 100,000 new body bogs amid the COVID-19 pandemic to prepare for the “worst-case” scenario.

“In order to meet the worst-case demand models, FEMA initiated a broad range of acquisition contracts to augment available stocks and produce more human-remains pouches for future requirements should they be needed,” a FEMA spokesperson told The Wall Street Journal Wednesday.

In a separate request unrelated to this order, the US Defense Department announced that FEMA asked it to provide 100,000 body bags for civilian use, Bloomberg reported earlier this month.

Dr. Anthony Fauci, Director of the National Institute of Allergy and Infectious Diseases, warned on Tuesday that the US could be in for a "bad fall" if coronavirus treatments do not start working soon and that the killer virus is not merely going to "disappear from the planet" when lockdowns finish.

On Wednesday, he warned that a second wave of the coronavirus is "inevitable" later this year.

"If by that time we have put into place all of the countermeasures that you need to address this, we should do reasonably well," Fauci told CNN in an interview, noting, "If we don't do that successfully, we could be in for a bad fall and a bad winter."

The head of the National Institute of Allergy and Infectious Diseases said that if states ease restrictions too quickly, the country could see a surge that would "get us right back in the same boat that we were a few weeks ago”, adding that widespread testing is needed to avoid such a path.

"It’s inevitable that the coronavirus will return next season. ... When it does, how we handle it, will determine our fate,” he stated.

As cases of the deadly disease and infections in the US continue to climb, Trump stated that the novel coronavirus would eventually be “eradicated” with or without a vaccine so that Americans and businesses could return to normal life and operations.

Trump has also ramped up attacks on China in recent weeks, insisting it concealed information about the coronavirus in the early stages of the outbreak and has all but blamed the country for the health crisis.

Trump believes China “will do anything they can” to make him lose his re-election bid, pointing to Beijing's handling of the coronavirus outbreak.

Taking aim at China, the US leader told Reuters in an interview on Wednesday that the country would prefer to see his Democratic rival Joe Biden take the Oval Office in November, stating it would pull out all the stops to see him win – though the former VP would first need to secure his party’s nomination.

"China will do anything they can to have me lose this race," Trump claimed.

As the US and China are in a war of words over the outbreak of COVID-19, Secretary of State Mike Pompeo on Wednesday renewed calls for the US to have access to Chinese virology labs in Wuhan, part of the administration's effort to investigate the origins of the virus.

The White House has also ordered intelligence officials to look into whether the World Health Organization (WHO) and the Chinese government withheld information about the coronavirus pandemic earlier this year. The directive was sent to the National Security Agency, Defense Intelligence Agency and the CIA.

In the latest development in the ongoing war of words between the two countries, Beijing stressed that the US has failed to accept responsibility for the coronavirus pandemic, dismissed the accusations as an attempt to “shift the blame” for the handling of the pandemic onto China by other international actors.

Claims for jobless benefits have shattered historic highs in the five weeks since the United States began to feel the economic devastation from social distancing measures adopted to slow the spread of the fatal virus.

More than 26 million Americans have applied for their first round of unemployment insurance since March as shuttered businesses began laying off workers. Millions more are believed to have lost their jobs but have been unable to apply for or are disqualified from receiving jobless benefits.

A study shows the US is expected to suffer the most COVID-19 deaths. The projection by the Institute for Health Metrics and Evaluation (IHME) at the University of Washington's School of Medicine suggested that the US is unsurprisingly in first place. According to the IHME study, the country is poised to sustain some 81,000 coronavirus deaths by August. In the worst case scenario, the death toll might even surpass the 136,000 mark.

Globally, the death toll from the coronavirus has topped 227,700, on Thursday, with more than 3,196,500 people infected worldwide, according to a tally maintained by Johns Hopkins University.