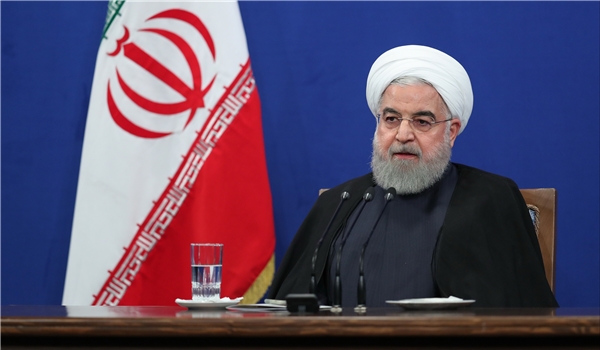 TEHRAN (FNA)- Iranian President Hassan Rouhani warned of Washington’s moves in the Persian Gulf, stressing that the country’s Armed Forces will not hesitate in safeguarding the Persian Gulf and Iran’s territories and interests.

“They should stop hatching plots against Iran,” he said.

President Rouhani said that the Iranian nation has always protected the Persian Gulf successfully and will continue its responsibility in the future, adding, “The Iranian military and law enforcement police forces have also succeeded in safeguarding the Persian Gulf.”

His remarks came after the US naval forces’ unprofessional and illegal moves in the Persian Gulf in the past few weeks and the American officials’ threats against Iran.

Last week, Trump said that he has instructed the US Navy to “shoot down and destroy” Iranian vessels if they harass American ships at sea.

Trump's message came after the US Navy announced last Tuesday that it has detected 700 cases with coronavirus symptoms among the sailors of the USS Theodore Roosevelt aircraft carrier.

The IRGC last week strongly rejected the Pentagon's recent claims about the harassment of the US naval forces by the IRGC boats in the Persian Gulf as a "Hollywood" story, and further warned against the US Navy’s new “unprofessional and dangerous” moves in the waterway.