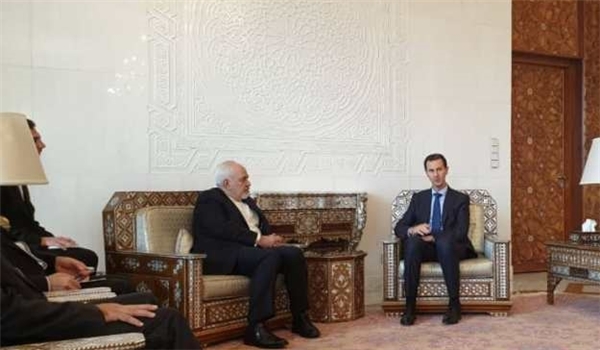 TEHRAN (FNA)- Iranian Foreign Minister Mohammad Javad Zarif in a meeting with Syrian President Bashar al-Assad said that Tehran’s support for the resistance front and fight against terrorism will not weaken after the US assassination of IRGC Quds Force Commander Lieutenant General Qassem Soleimani.

“The martyrdom of General Soleimani will not change the Islamic Republic of Iran’s path in support of the resistance and fight against terrorism in the region,” Zarif said in the meeting in Damascus on Monday.

Elsewhere, he appreciated the Syrian president for his sympathy with Iran’s victims of coronavirus epidemic, and said, “Now the real intention behind the US opposition to the removal of cruel sanctions against nations in the hard conditions of fight against the disease has been revealed.”

President Assad, for his part, underlined the unique role of General Soleimani in war on terrorism, and lauded Iran for supporting the Syrian nation’s anti-terrorism efforts.

During the meeting, the two sides also discussed the latest developments in Syria, including the constitution committee, Idlib and the political process in the country.

After the US assassination of General Soleimani and Abu Muhandis, Iraqi lawmakers unanimously approved a bill on January 5, demanding the withdrawal of all foreign military forces led by the United States from the country.

Iraqi Popular Mobilization Units (PMU), better known by their Arabic name Hashd al-Sha'abi, in a statement earlier this month blasted the US forces based in their country as "occupiers", pledging to bring the occupation of the Arab country to an end.

Hashd al-Sha’abi groups said from now on the US troops in the Arab country will be dealt with as "occupation forces", presstv reported.

The statement cited the US refusal to withdraw its forces from Iraq and its “continued aggression” against the country as the reasons for their decision.

“You have proven to everyone that you are occupation forces and that you only respect the language of force; on these bases you will be dealt with as occupiers," the statement reads.

It also said that the Iraqi resistance forces' military operations are a basic response to the US aggression.

"Be aware that all operations which have been carried out against you so far were only a minor response to your aggressions as the decision to carry out operations [against US forces] had not been taken back then,” it added.

They stressed that the recent US threats to target the resistance forces are aimed at covering up their own failures.

In late March, the other PMU group Kata'ib Hezbollah blew the lid off a plot by the US military to carry out massive aerial operations — backed by ground troops – against bases of the elite anti-terror force, which is currently busy helping the government in the fight against a new coronavirus pandemic.

The PMU statement was concluded with a message to the Iraqi people, in which the resistance groups vowed that they will not let the US occupy the country and rob its resources.