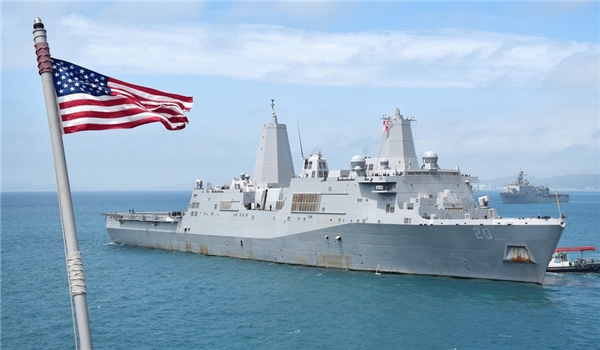 TEHRAN (FNA)- The Islamic Revolution Guards Corps on Sunday strongly rejected the Pentagon's recent claims about the harassment of the US naval forces by the IRGC boats in the Persian Gulf as a "Hollywood" story, and further warned against the US Navy’s new “unprofessional and dangerous” moves in the waterway.

“In recent weeks, we have witnessed a repetition of the terrorist US Navy's unprofessional behavior in the Persian Gulf threatening security and tranquillity and posing new dangers to the region,” a statement by the IRGC Navy’s Public Relations Office said on Sunday.

It added that in recent weeks, including on April 6 and April 7, the US warships in a dangerous move blocked the voyage of Iranian ship, Shahid Siavashi, on two seperate occassions in the region, but were forced to step back after the IRGC warnings and the professional and smart moves of the Iranian vessel.

The US fifth fleet had claimed that a group of eleven Iranian naval vessels harassed six US navy vessels in the Northern Persian Gulf for about an hour on Wednesday, with one coming within just ten yards of a Coast Guard cutter.