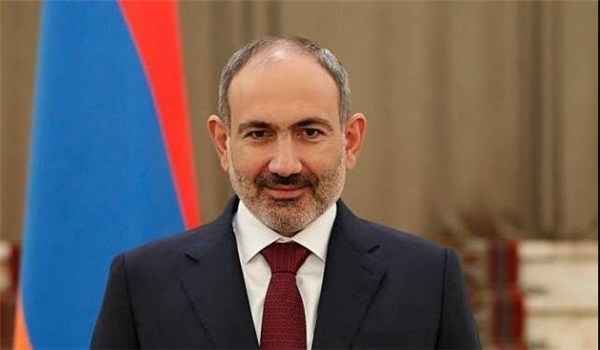 "For this I want to thank both our businessmen and our Georgian, Russian and Iranian partners, who spare no efforts for ensuring cargo transport from and to Armenia in the best possible way," Pashinyan said on Friday.

He noted that one of the important features of the coronavirus outbreak in Armenia is that the phenomenon of empty showcases in groceries did not occur here, and said, "The state of emergency has been prolonged until May 14 in Armenia. Strict restrictions are imposed on the people's movement."

Armenia confirmed 1201 cases, death of 19 people, and recovery of 402 others while there are still 780 active cases.

The Armenian prime minister pointed out in his address that the COVID-19 outbreak is under control in his country.

In relevant remarks in early February, Armenian Ambassador to Iran Artashes Toumanian stressed the need for increased cooperation between Tehran and Yerevan despite the US sanctions.

“Regarding Iran's current situation it is possible to cooperate and work together during sanctions,” Toumanian said in a meeting with Kerman province's governor.

"Iran and Armenia can cooperate in many different fields and these collaborations must be identified and accounted for based on the priorities of the two countries," he said.

Toumanian went on to say that Iran possesses good economic resources and the level of cooperation between Iran and Armenia has the potential to increase in the future.

“Iran-Armenia neighborhood and membership of Armenia in Eurasian Economic Union (EAEU) are among the prominent potentials of Armenia which can boost bilateral ties and economic interactions between the two countries," he added.

In a relevant development in December, Iran and Armenia signed a memorandum of understanding (MoU) to boost cooperation on technical and vocational training as well as labor and employment.

The MoU was signed by Iran's Minister of Cooperative, Labor and Social Welfare Mohammad Shariatmadari and his Armenian counterpart Zaruhi Batoyan.

“Iran has always been seeking ways to promote ties with its neighbors and all regional states,” Shariatmadari said during a meeting in Tehran.

The Iranian Labor Minister underlined the need to facilitate the implementation of the previous memoranda signed on labor and social affairs in 2011.

Batoyan, for his part, referred to many common areas of cooperation between the two countries, and voiced his country’s willingness to benefit from Iran's experience in the fields of training vulnerable people, disabled, children and elderly and women.

The Armenian minister added that the joint projects will help both countries improve dynamism in their societies.

He invited Shariatmadari to visit Armenia in 2020.