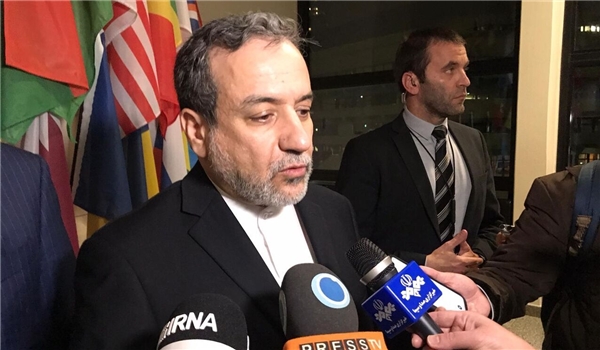 Araqchi made the remarks in a phone conversation with his Azeri counterpart Khalaf Khalafov on Wednesday.

The two sides also discussed bilateral ties, and emphasized the importance of continued friendly ties and cooperation between the two countries in all fields.

Araqchi, for his part, pointed to the release of certain reports by media outlets, and added, “Enemies are trying to undermine friendly and amicable ties between the two neighboring countries.”

Araqchi seized this opportunity to express his special thanks to the humanitarian aid sent by the Republic of Azerbaijan Iran to combat the novel coronavirus epidemic, and termed continuation of goods transit and transport between the two countries an important point in relations of the countries considering the observation of health protocols.

Turning to the situation of quarantine and closure of universities and academic centers, he called for the assistance of the Azeri government in returning students and other Iranians nationals to the country which was welcomed by the Azeri side.

Iran has always practiced a non-partial approach to the conflicts in the Caucasus region and it has been attested by all sides of argument in the region.

In relevant remarks in March, Iranian Foreign Ministry Spokesman Seyed Abbas Mousavi criticized holding elections in Nagorno-Karabakh, and reassured that Tehran is still supporting its principled solution for the disputed area conflict which is based on dialogue and international regulations.

"Islamic Republic of Iran is opposed to any move that will fan the flames of tension in the region," Mousavi said.

"We believe that any move that will complicate settlement of disputes between Iran's neighboring states of Armenia and Azerbaijan Republic should be avoided," the Iranian foreign ministry spokesman added.