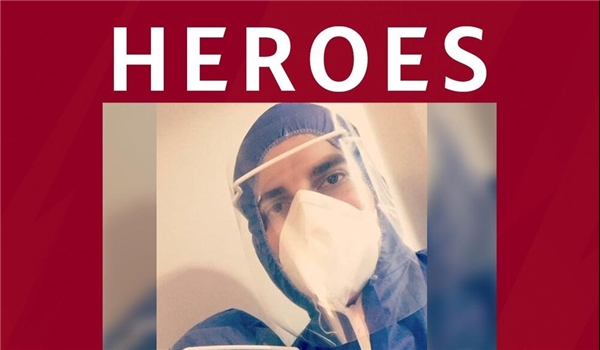 TEHRAN (FNA)- Italy's Football Club AS Roma named three Iranian doctors among medical staff of some other countries to laud them for their brave combat against coronavirus pandemic.

“Khojasteh Samadi & her husband Khashayar Abbasi are doctors in the Iranian city of Bahar. Throughout Nowruz - Persian New Year - the couple have spent the entire holidays taking care of Covid-19 patients & haven't been able to see their families for nearly two months. Respect," AS Roma wrote in her Twitter account.

An Iranian medical official said that the couple, like a lot of other members of the medical staff, volunteered for fighting the virus.

AS Roma also named Rosa Didar, a doctor from Tehran, writing, “Rosa is an emergency specialist at Tehran Hospital in Iran. Deprived of family contacts for 2 months and feeling exhausted, she still fights on.”

45 Iranian doctors and nurses have lost their lives in the nationwide fight against coronavirus.

The coronavirus COVID-19 is affecting approximately all countries and territories around the world. The virus was first reported in the central Chinese city of Wuhan late last year. It has so far killed more than 64,000 people and infected over 1.2 million others globally.

As for Iran, the Iranian health ministry announced on Saturday that 2,560 new cases of infection to COVID-19 virus have been identified in the country, adding that 3,452 patients have died so far.

“According to definite diagnostic standards, a sum of 2,560 new cases of infection to COVID-19 virus have been identified in Iran during the past 24 hours, increasing the number of infections to 55, 743,” Health Ministry Spokesman Kianoush Jahanpour said.

He added that fortunately, 19,736 patients infected with COVID-19 virus have also recovered and been discharged from hospital.

Jahanpour said that 158 coronavirus patients have passed away during the past 24 hours, noting that the death toll has increased to 3,452 so far.

As the death toll from the virus surges, Iran intensifies its preventive safety measures. Closure of schools and universities has been extended until early April.