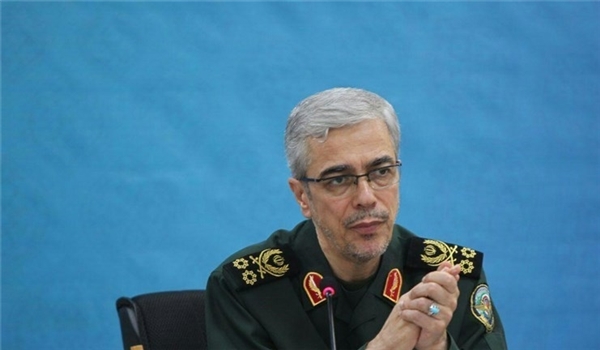 TEHRAN (FNA)- Chief of Staff of the Iranian Armed Forces Major General Mohammad Hossein Baqeri warned the US against making the slightest mistake or miscalculation against Iran or wait for dreadful consequences, and said that the American troops' movements are under close monitoring by the Islamic Republic.

"The US military activities in Iraq and the Persian Gulf region have increased. In the media, they are massively reporting that they have intentions against resistance groups in Iraq and the Popular Mobilization Units forces. We keep a close eye on these activities, and our nation's forces are and will be defending our country's land, air, and sea borders," the top Iranian general said.

He pointed to the recent developments in Iraq, and said, "What happened against the US bases in Iraq in recent weeks is the natural reaction of the Iraqi people and their resistance to the evil act of assassinating General Qasem Soleimani and Abu Mahdi al-Muhandis, and these reactions have nothing to do with our country unlike what the Americans sometimes attribute it to us."

Major General Baqeri further stated that the Americans themselves are well-aware that the people of the region, including Iraqis, are opposed to their military presence in these countries, and this is their natural reaction.

"We are watching them and standing up for our country. As always, we emphasize that if they make the slightest move against our country's security, they will face the most severe reactions," the top Iranian general said.

In relevant remarks on Thursday, Iranian Foreign Minister Mohammad Javad Zarif blasted the US for promoting lies and nonsense, and said that although the Islamic Republic will not begin a war, it will bring any country trying to undermine Iran's sovereignty to its knees.

"Don’t be mislead by usual warmongers, AGAIN, @realDonaldTrump: Iran has FRIENDS: No one can have MILLIONS of 'proxies' Unlike the US—which surreptitiously lies, cheats & assassinates—Iran only acts in self-defense," Zarif wrote on his Twitter account.

"Openly Iran starts no wars, but teaches lessons to those who do," he added.

Zarif's remarks came after US President Donald Trump claimed on Wednesday that as per information received by the US government, "Iran or its proxies are planning a sneak attack on US troops and/or assets in Iraq. If this happens, Iran will pay a very heavy price, indeed!"

In relevant remarks on Wednesday, Iranian Foreign Ministry Spokesman Seyed Abbas Mousavi said that the military moves of the US in Iraq are against the positions of the Iraqi government, parliament and people, and warned against the repercussions of such acts.

"The US is making the moves while the UN Secretary-General Antonio Guterres and the international community have demanded any belligerent and tension-creating measures be stopped due to the outbreak of the COVID-19," Mousavi said.

Mousavi said that the US should respect the will of the Iraqi Government and people by leaving the country.

In early January, the Iraqi lawmakers unanimously approved a bill demanding the withdrawal of the US troops from Iraq.

On January 9, former Iraqi Prime Minister Adel Abdul-Mahdi called on the United States to dispatch a delegation to Baghdad tasked with formulating a mechanism for the move.

According to a statement released by his office at the time, Abdul-Mahdi “requested that delegates be sent to Iraq to set the mechanisms to implement the parliament's decision for the secure withdrawal of (foreign) forces from Iraq” in a phone call with US Secretary of State Mike Pompeo.

The 78-year-old politician said that Iraq rejects violation of its sovereignty, particularly the US military's violation of Iraqi airspace in the airstrike that assassinated former Commander of the Islamic Revolution Guards Corps (IRGC) Qods Force Lieutenant General Qassem Soleimani, and former acting Commander of the Iraqi Popular Mobilization Units Forces  Abu Mahdi al-Muhandis and their companions.

The US State Department bluntly rejected the request the following day.