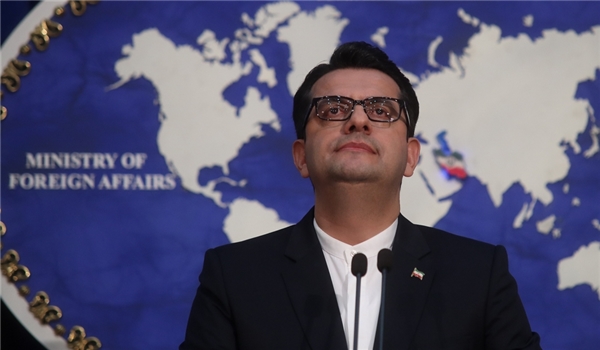 TEHRAN (FNA)- Iranian Foreign Ministry Spokesman Seyed Abbas Mousavi advised the Saudi-led coalition in Yemen to take note of the realities on the ground, including their failure against the Yemenis’ tough resistance, and end their military presence in the Arab country.

Mousavi's remarks came in reaction to baseless allegations made by spokesman of the Saudi-led military coalition in Yemen.

"Saudi Arabia with hallucination of victory has waged military aggression on Yemen," he said, adding that now after five years it has become satisfied with this miscalculation.

The Iranian foreign ministry spokesman noted that this is while, destruction and massacre of Yemenis were the only achievements of these aggressive measures.

Mousavi, meantime, dismissed the baseless claims by spokesman of military coalition in Yemen with regard to Iranian experts’ presence in Yemen, and advised the aggressors to stop playing with words, blame game and accusing in a bid to compensate for political and military failures.

Referring to the UN Chief’s offer for establishing truce to fight coronavirus and its verification by National Salvation Government, Mousavi urged aggressors to become committed to Stockholm agreement and to stop their crimes and the war in Yemen.

The United Nations Security Council adopted Resolution 2451 to support the Stockholm Agreement on deployment of a team in order to facilitate monitoring and implementing the Agreement and installing truce in important Yemeni ports.

The resolution mainly focuses on sending essential commodities to the Yemeni people, supporting the Stockholm Agreement, assigning the Secretary-General of the United Nations to implement it and observing the ceasefire.

Saudi Arabia and its regional allies attacked Yemen in March 2015 to bring back to power the deposed and fugitive president of Yemen Abdrabbuh Mansour Hadi.

Since then, the invaders have committed horrible war crimes against Yemeni civilians.

Since the outbreak of the war, Iran has reiterated that Yemen's crisis has no military solution. Iran has put forward a 4-article plan in the early days of aggression.

Five years ago  on March 26, a military campaign was launched by the Saudi regime and a number of its vassal states to reinstall a Riyadh-backed former regime in Yemen.

The Western-backed offensive, coupled with a naval blockade, has destroyed the country’s infrastructure.

The aggression has also led to the world’s worst humanitarian crisis in Yemen, where thousands of people, including many kids, were killed and hundreds of thousands afflicted by cholera, diphtheria, measles and dengue fever in 2019.