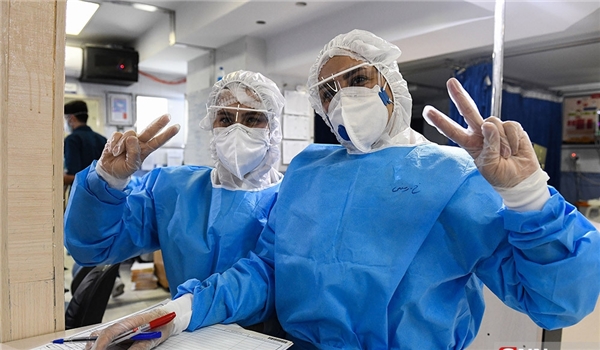 TEHRAN (FNA)- Health officials of Zavareh town in Isfahan province announced that an 86-year old woman has succeeded in bringing down the coronavirus disease to its knees and left hospital while the province was one of the hot spots of the epidemic at the onset of the outbreak.

He added that the patients lacking insurance will pay only 10 percent of treatment expenses and the government will pay the remaining 90 percent.

Also, Chief of the Police Force Hossein Ashtari announced that intercity road transits has decreased due to the cooperation of the people with the force to observe the protocols of the health ministry.

Moreover, Interior Minister Abdulreza Rahmani Fazli expressed hope that businesses could resume operation after April 8 as the number of the dead and hospitalized patients has declined.

Yet, Government Spokesman Ali Rabiyee said the government is moving toward production of 20,000 coronavirus testing kits per day.

He also vowed that the ministry of industry, mine and trade is going to prevent any increase in goods prices.

Meantime, the Minister of Health Saeed Namaki announced that 67 million Iranians have been screened across the country to diagnose the coronavirus-infected cases, adding that 19,000 of these people have been sent to hospitals.

He also said that 55 million people were screened through telephone and another 12 million went to the website to do self-screening.

Besides, an Iranian knowledge-based company said it is manufacturing 30 ventilators in a bid to meet the country's need in the campaign against coronavirus epidemic, as Iran has mobilized its state and private sector capacities to fight the deadly virus under tough US sanctions.

Furthermore, Head of Pasteur Institute of Iran Alireza Biglari informed of setting up 60 coronavirus-special laboratories across the country in less than ten days to help meet the medical centers' need in the national campaign against the deadly disease.

Meanwhile, Iran's Minister of Industry, Mine and Trade Reza Rahmani informed of allocating 100,000bln Tomans (over $23bln) for the protection of the production centers harmed by the coronavirus epidemic.

At the same time, Members of University Students' Basij (Volunteer) Organization sent a large cargo of health and hygiene products to the American people via the US Interests' Section represented by the Swiss embassy in Tehran in a bid to help them with campaign against the coronavirus.

The coronavirus COVID-19 is affecting approximately all countries and territories around the world. The virus was first reported in the central Chinese city of Wuhan late last year. It has so far killed more than 43,000 people and infected approximately 873,000 others globally.

As for Iran, the Iranian health ministry announced on Wednesday that 2,987 new cases of infection to COVID-19 virus have been identified in the country, adding that 3,036 patients have died so far.

“According to definite diagnostic standards, a sum of 2,987 new cases of infection to COVID-19 virus have been identified in Iran during the past 24 hours, increasing the number of infections to 47, 593,” Health Ministry Spokesman Kianoush Jahanpour said.

He added that fortunately, 15,473 patients infected with COVID-19 virus have also recovered and been discharged from hospital.

Jahanpour said that 138 coronavirus patients have passed away during the past 24 hours, noting that the death toll has increased to 3,036 so far.