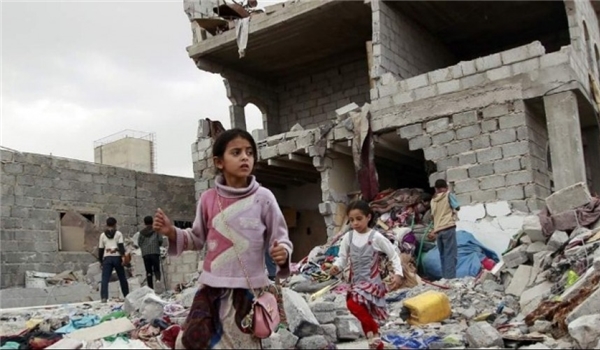 As we watch the destruction that the novel coronavirus is wreaking on those wealthy countries that, by the way, turned Yemen into a failed state with help from Saudi Arabia and cohorts in 2015, we can only pray for Yemen.

Lest we forget, cholera, diphtheria, and malnutrition have already overwhelmed the war-stricken health system of Yemen. Imagine how bigger the death toll would be when the uncurable virus begins unleashing its devastation. The impact of COVID-19 would be same as the impact of the illegal war to date: no one would be safe. Innocent civilians, the most vulnerable, would bear a disproportionate share of the burden.

People in places like the United States and Europe are now having a taste of their own government’s medicine. They can now feel what Yemen has gone through for the past five years since the Saudi-led, US-backed invasion began. It’s almost one good turn that deserves another: uncurable illness, deepening economic pressure, fewer and worse options for parents and caregivers, and a constant change in routine.

At least, the Westerners are still in the safety of their homes. But in Yemen, millions of refugees now live in overcrowded shelters, without safe water, proper nutrition or proper health care. The basic steps others are taking to curtail the spread of COVID-19 are virtually impossible. Should it take hold, the results would be unthinkable. It would be a death trap.

Public health crises don’t just threaten the well-being of the afflicted; their impacts ripple widely across families and societies. Make no mistake. Yemenis are not ready for yet another fast-spreading disease.  Their government, if any, is ill-equipped and unable to take on extraordinary responsibilities – and is one that most Yemenis can identify with. They are also ill-equipped and unprepared.

As the world marks five years since the US-backed, Saudi-led coalition launched the devastating war, people in Yemen find themselves defenceless against even basic maladies like diphtheria and cholera. These pathogens are held at bay in most societies by taking basic public health measures, drinking safe water and eating nutritious food.

But the warmongers have damaged or destroyed more than half of Yemen’s hospitals and health facilities through indiscriminate bombing and shelling. The airstrikes have destroyed water and sanitation infrastructure in an already water-poor country, leaving more than two-thirds of the country with only unsafe water to drink, according to the Human Rights Watch.

As a result, “Yemen now has the unenviable distinction of having experienced the world’s worst diphtheria outbreak and famine in 30 years and the largest cholera outbreak ever recorded.” Even when it comes to critical patients who can be saved, the United Nations says the protracting war has shown no mercy. Tens of thousands of Yemenis with life-threatening but manageable conditions have nowhere to go to seek medical treatment. Imagine the scale of humanitarian catastrophe when the coronavirus finally arrives.

Even if the world countries decide to send medicine or health care workers, they will find this impossible. The Saudi-led coalition has shut down commercial air traffic in and out of Sana’a.

The Saudi-led, US-backed aggression in Yemen must end before it claims more lives when the virus arrives. The warmongers have shown too often these past five years that they are not willing to make even small compromises to save innocent lives. For this war crime, they should be held to account at the International Criminal Court in The Hague.

The international community cannot afford to wait to demand the ceasefire and political settlement that can bring the life-saving peace that Yemen’s people demand. The coronavirus will soon arrive in Yemen. The time is now, not tomorrow, to end the conflict, send humanitarian aid to restore the war-torn nation’s health systems, tackle the diseases ravaging its people, and prevent a new in the name of COVID-19 pandemic .

TEHRAN (FNA)- Nearly 600 frontline healthcare workers have died of COVID-19, according to Lost on the Frontline, a project launched by The Guardian and Kaiser Health News (KHN) that aims to count, verify and memorialize and every healthcare worker who dies during the pandemic.
﻿
﻿
Sections