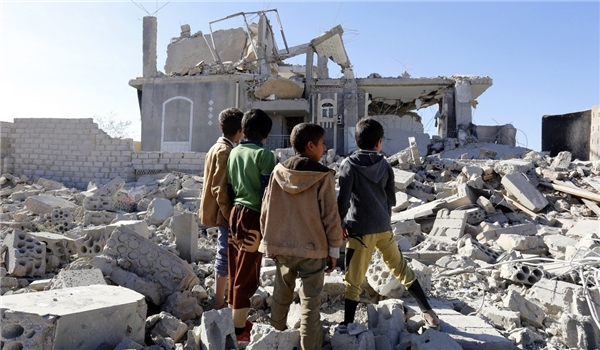 TEHRAN (FNA)- The Iranian foreign ministry reiterated that the crisis in Yemen has no military solution, calling for an end to the devastating war in the poor Arab country by the Saudi-led coalition and its supporter, Washington.

The Iranian foreign ministry in a statement on the occasion of the 5th anniversary of the Saudi-led invasion of Yemen on Tuesday stressed that the US will leave Yemen disappointedly.

It added that the US has proven that its presence in countries, as well as regions, has been tantamount to insecurity and plunder of their assets.

The devastating war has left nothing but the destruction and killing of Yemen's innocent and oppressed people for six years, the statement said.

The cruel sanctions and crimes have made the catastrophic situation of the Yemeni people as world's greatest human tragedy of the century, it noted.

The military invasion pursued by the US and some other states not only turning a blind eye to the war crimes of the invading forces but also continuing to share weapons and intelligence backup, the statement further noted.

The United States has not been satisfied with these measures, it added, adding it has also expanded its military presence in various parts of Yemen.

Since the outbreak of the war, Iran has reiterated that Yemen's crisis has no military solution, the statement said, noting that Iran has put forward a 4-article plan in the early days of aggression.

Yemen is preparing to mark, on March 26, the fifth anniversary of the military campaign, which the Saudi regime and a number of its vassal states launched to reinstall a Riyadh-backed former regime in Yemen.

The Western-backed offensive, coupled with a naval blockade, has destroyed the country’s infrastructure.

The aggression has also led to the world’s worst humanitarian crisis in Yemen, where thousands of people, including many kids, were killed and hundreds of thousands afflicted by cholera, diphtheria, measles and dengue fever in 2019.