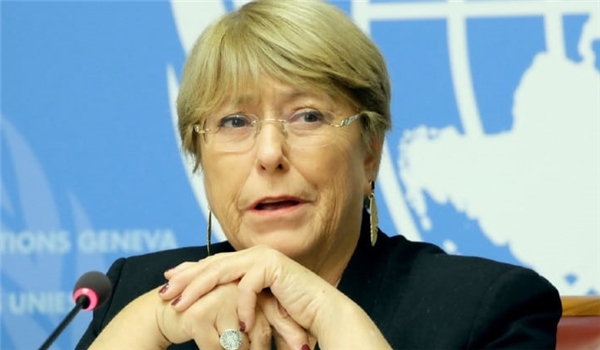 TEHRAN (FNA)- UN High Commissioner for Human Rights Michelle Bachelet warned that the US sanctions against Iran which impede the country’s efforts to fight coronavirus puts the entire world in danger.

Bachelet said on Tuesday that any sanctions imposed on Iran, among other countries grappling with the coronavirus pandemic, should be “urgently re-evaluated” to support lives of millions of people worldwide.

“At this crucial time, both for global public health reasons, and to support the rights and lives of millions of people in these countries, sectoral sanctions should be eased or suspended,” she said.

“In a context of global pandemic, impeding medical efforts in one country heightens the risk for all of us," Bachelet added.

She stressed the importance of giving broad and practical effect to humanitarian exemptions from sanctions measures “with prompt, flexible authorization for essential medical equipment and supplies”.

Bachelet pointed in particular to the case of Iran, one of the hardest-hit countries by the pandemic, and said the COVID-19 outbreak was also spreading to neighboring Afghanistan and Pakistan.

She said even before the pandemic, human rights reports had repeatedly emphasized the impact of sectorial sanctions on Iran’s access to essential medicines and medical equipment, including respirators and protective gear for healthcare workers.