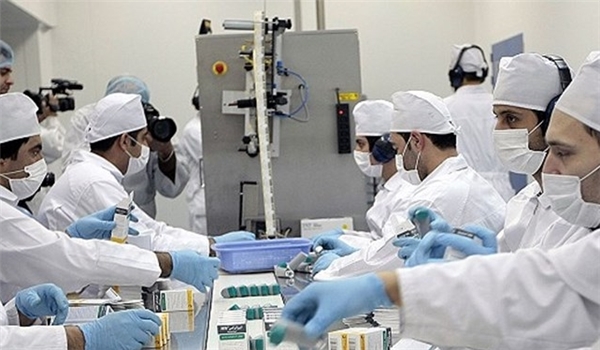 TEHRAN (FNA)- Head of Iran's Food and Drug Administration (IFDA) Mohammad Reza Shanehsaz announced that a medicinal compound developed by Iranian researchers to treat coronavirus infection will be mass-produced and supplied to the market within the next 10 days.

“The raw materials for the production of these drugs were imported to the country yesterday,” Shanehsaz told FNA on Saturday.

He added that the process to produce a fully Iran-made drug has started and Iranian hospitals will start taking the drug to treat the coronavirus patients in the next 7 to 10 days.

Shanehsaz said that successful clinical tests have been carried out on the drug compound and necessary licenses have been received, adding that the medicine will be supplied to the pharmacies in the next 10 days.

Meantime, Director-General of the IFDA for Medicine Gholamhossein Mehr Alian said in a meeting on Saturday that 400,000 liters of alcohol is produced every day in Iran, adding that 25 percent of the product is sent to the hospitals.

Also, officials informed on Tuesday that Iranian researchers had discovered a medicinal compound which can treat the damage inflicted on lungs due to coronavirus infection.

“The new medicinal compound is not special to the coronavirus patients, but it treats respiratory and pulmonary diseases,” Chairman of the Biotechnology Development Council of Iran Mostafa Qaneyee said in a press conference.

He added that the new medicinal compound can decrease the time a coronavirus patient needs to stay at hospital to 4 days, noting that 40% of Iranian patients who received the combination of three drugs have been discharged from hospital in less than 4 days.

“In this treatment method, in addition to the protocols of the health ministry, the three drugs of Azithromycin, Prednisolone and Naproxen have been used as a compound,” Qaneyee said.

“We have observed that the compound rapidly decreases the CRP and the hospitalization period is reduced significantly and of course, this is the start of our research and we will inform you of other researches too after receiving license from the Coronavirus Campaign Headquarters,” he added.

The coronavirus COVID-19 is affecting over 170 countries and territories around the world. The virus was first reported in the central Chinese city of Wuhan late last year. It has so far killed more than 11,500 people and infected over 278,000 others globally.