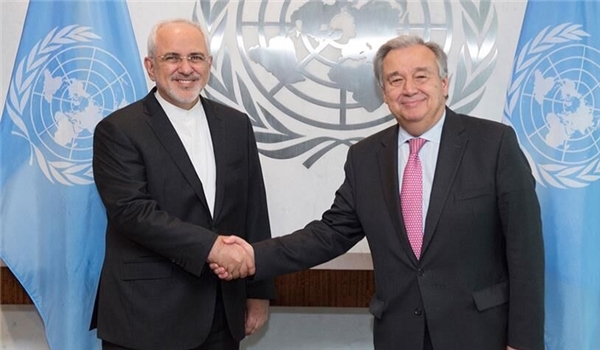 During the conversation late on Friday, Zarif and Guterres discussed the latest developments about Iran's combat with coronavirus outbreak as well as the obstacles hindering it.

Guterres, for his part, expressed solidarity with the Iranian nation, and stressed the need for removing sanctions imposed on the Iranian nation in a bid to help them successfully fight the killer virus spread.

Zarif appreciated the UN-affiliated organizations' stances and assistance, underlining the necessity to lift the US cruel, inhumane, illegal and unilateral sanctions against the Iranian nation.

The talks were held amid an outcry on national and international levels against US sanctions, with Russia, China, Pakistan as well as different medical organizations and rights groups urging the administration of US President Donald Trump to lift sanctions against Iran.

The coronavirus COVID-19 is affecting over 170 countries and territories around the world. The virus was first reported in the central Chinese city of Wuhan late last year. It has so far killed more than 11,400 people and infected over 276,000 others globally.

TEHRAN (FNA)- Years ago Iranian people shouted that they could not breathe and Imam Khomeini pushed the US’s knee away from the neck of the oppressed, Parliament Speaker Mohammad Baqer Qalibaf said.

Zarif Calls on US to Release Iranian Hostages

TEHRAN (FNA)- Iranian Foreign Minister Mohammad Javad Zarif in a message expressed pleasure over the release of the country’s professor Sirous Asgari, and urged the US to free other Iranians kept hostage by Washington.
﻿
﻿
Sections