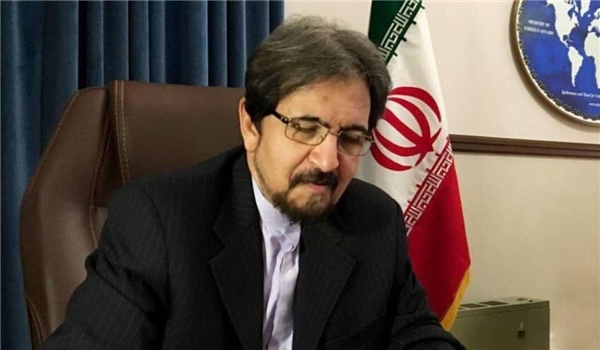 TEHRAN (FNA)- Iranian Ambassador to France Bahram Qassemi lashed out at certain European governments for surrendering to the US anti-Tehran pressures, reminding that imposing bans on his country’s flights into the continent at the time of coronavirus crisis will go down in history as shameful.

Qassemi wrote on the Twitter account of the Iranian Embassy in France that instead of helping Iran, certain governments in Europe have decided to follow the United States and pile more pressure on Iran.

The envoy said it was a historic disgrace that Iran, a country already grappling with harsh US sanctions, is being denied of help in its fight against coronavirus.

“Instead of understanding the situation and helping the Iranians, some people, willingly or unwillingly and through vague excuses and in line with America’s maximum pressure, are adding to these pressures,” read part of Qassemi's statement.

“Let’s avoid getting shamed by history,” he said.

The envoy was referring to recent restrictions imposed on Iran’s flag carrier Homa forcing the airline to suspend all its flights to European destinations.

Homa announced on Sunday that it was trying to find a way out of the “unknown restrictions” imposed by European authorities.

That comes as Iran has dismissed claims that banning flights to Europe was related to the outbreak of coronavirus in the country.

For the past two years, the United States has been trying to persuade European governments that they should stop processing flights by Iran’s Mahan Air.

That comes as Homa, known internationally as IranAir, has introduced new routes to compensate for Mahan Air’s cancelled flights to European destinations.

That leaves many Iranians stranded in European countries where the number of people infected with the new coronavirus keeps surging.

In a tweet on Saturday, Iranian Parliament Speaker's Special Advisor for International Affairs Hossein Amir Abdollahian denounced American officials’ hypocrisy in claiming readiness for help to counter the coronavirus, stressing that Tehran is still unable to import medical needs because of the US sanctions.

"The US Treasury does not allow the imports of Iran's purchased medicine and medical equipment for treating coronavirus patients in the country," Amir Abdollahian wrote.

"US officials are clearly lying and there has been no suspension of sanctions," he added.

"They have targeted Iran and the Iranian people," Amir Abdollahian noted.

Earlier on Saturday, Iranian Foreign Minister Mohammad Javad Zarif called upon the international community to break its silence and inaction in regard to US President Donald Trump’s malevolent attempt to increase Iranians’ sufferings amidst a coronavirus outbreak in the country.

“Trump is maliciously tightening US' illegal sanctions with aim of draining Iran's resources needed in the fight against COVID19—while our citizens are dying from it,” Zarif tweeted, lashing out at Washington for its politicized and inhuman approach to the spread of coronavirus in the world.

Iranian Foreign Ministry Spokesman Seyed Abbas Mousavi lashed out at US Secretary of State Mike Pompeo for his anti-Tehran accusations in regard to coronavirus epidemic, adding that such kind of approach is an outcome of Washington’s reliance on deception and misinformation.

“Point a finger and there are 3 more pointing back at you; only an administration infected with acute mismanagement, deception and lies could be so hideous to level senseless accusations against Iranians who're sacrificially struggling to shield humanity against COVID19 pandemic,” wrote Mousavi in a Saturday tweet.

Mousavi questioned the US handling of the coronavirus outbreak by releasing a video showing Pompeo facing questions from a lawmaker skeptical about the administration's response to the coronavirus threat in a hearing before the House Foreign Affairs Committee.

Trump has said the US is willing to help the Iranians with the problem, adding that “all they have to do is ask.”

Pompeo had also claimed during a House hearing that the Islamic Republic did not have a solid healthcare infrastructure and that the US had offered to help it with the coronavirus response.

Iran is currently battling one of the world's deadliest outbreak of the coronavirus outside China, where it originated.