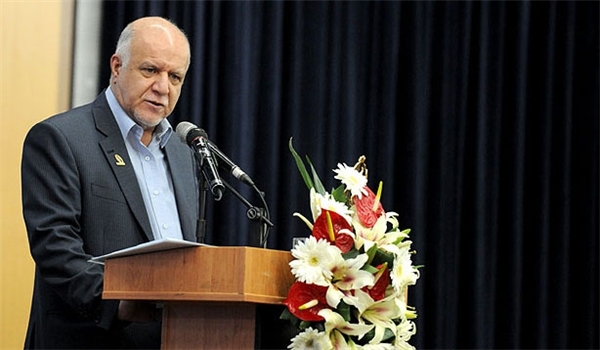 TEHRAN (FNA)- Iranian Oil Minister Bijan Namdar Zanganeh said that the US is deceiving the world when it claims that Tehran has been granted waivers for importing medications and humanitarian needs, adding that American officials will be prosecuted for such crimes in the future.

Namdar Zanganeh lashed out at the United States for claims that Tehran’s import of medicine and other humanitarian goods are exempt from Washington's unilateral sanctions, calling such claims “a very big lie”.

He told Bloomberg in an interview published on Monday that Iran’s hands are tied up when it comes to buying medicines and food from abroad because the American sanctions have hampered the country’s oil sale as the main source of revenue for the government.

“It's a very big lie,” said Namdar Zanganeh, adding, “Do they think that we have billions of dollars in deposit in the international bank to come into us to use that money for buying the food and medicines.”

Namdar Zanganeh said that US sanctions have specifically targeted the Iranian people and not just the government of the country.

He said the Americans should be held into account for making life difficult for the Iranians, especially the poor living in the country.

“I believe ... at some time in the future these should be asked in a criminal court,” said the minister.

The comments come as Iran is struggling to contain the surge of a coronavirus that has affected thousands of people while causing more than 200 deaths in the country since it began last month.

US authorities have claimed that their sanctions on Iran, enacted since November 2018 and months after Washington pulled out of a nuclear agreement with Iran, have not affected the trade of humanitarian goods.

However, international organizations and governments have asked the US to lift its bans and allow Iran to access the medicine and medical gear it needs to fight the new coronavirus.

Namdar Zanganeh talked to the Bloomberg on the sidelines of a recent meeting of the Organization of Petroleum Exporting Countries (OPEC) in Vienna, Austria.

In a tweet on Saturday, Iranian Parliament Speaker's Special Advisor for International Affairs Hossein Amir Abdollahian denounced American officials’ hypocrisy in claiming readiness for help to counter the coronavirus, stressing that Tehran is still unable to import medical needs because of the US sanctions.

"The US Treasury does not allow the imports of Iran's purchased medicine and medical equipment for treating coronavirus patients in the country," Amir Abdollahian wrote.

"US officials are clearly lying and there has been no suspension of sanctions," he added.

"They have targeted Iran and the Iranian people," Amir Abdollahian noted.

Earlier on Saturday, Iranian Foreign Minister Mohammad Javad Zarif called upon the international community to break its silence and inaction in regard to US President Donald Trump’s malevolent attempt to increase Iranians’ sufferings amidst a coronavirus outbreak in the country.

“Trump is maliciously tightening US' illegal sanctions with aim of draining Iran's resources needed in the fight against COVID19—while our citizens are dying from it,” Zarif tweeted, lashing out at Washington for its politicized and inhuman approach to the spread of coronavirus in the world.

Iranian Foreign Ministry Spokesman Seyed Abbas Mousavi lashed out at US Secretary of State Mike Pompeo for his anti-Tehran accusations in regard to coronavirus epidemic, adding that such kind of approach is an outcome of Washington’s reliance on deception and misinformation.

“Point a finger and there are 3 more pointing back at you; only an administration infected with acute mismanagement, deception and lies could be so hideous to level senseless accusations against Iranians who're sacrificially struggling to shield humanity against COVID19 pandemic,” wrote Mousavi in a Saturday tweet.

Mousavi questioned the US handling of the coronavirus outbreak by releasing a video showing Pompeo facing questions from a lawmaker skeptical about the administration's response to the coronavirus threat in a hearing before the House Foreign Affairs Committee.

Trump has said the US is willing to help the Iranians with the problem, adding that “all they have to do is ask.”

Pompeo had also claimed during a House hearing that the Islamic Republic did not have a solid healthcare infrastructure and that the US had offered to help it with the coronavirus response.

Iran is currently battling one of the world's deadliest outbreak of the coronavirus outside China, where it originated.