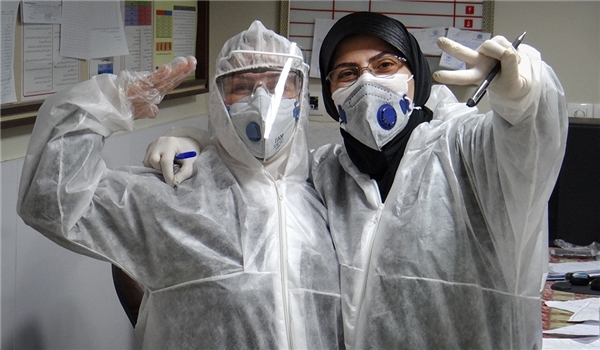 TEHRAN (FNA)- The Iranian embassy in Belgium, in a statement issued on Saturday, hailed the selfless efforts of compatriot doctors and nurses in their fight against the outbreak of coronavirus, highlighting the importance of the role played by medical personnel in the face of the US inhuman sanctions.

The Iranian diplomatic mission in Belgium said in a statement today that despite all the inhumane sanctions on the country, the Iranian doctors and hospital personnel are in the frontline of the fight against the virus.

It referred to some of the measures taken by Iran since two weeks ago when the first cases of infection to the virus were detected in the country.

The statement said that temporary hospitals have been formed, streets are disinfected, working hours of state and public organizations have been reduced, health guidelines are issued in different parts of the country, and border inspections have been carried out, along with the imposition of travel restrictions and cancellation of railway and air travels.

All the religious rituals as well as, cultural and social ceremonies have been suspended and all the schools and universities are shut down all across the country until the end of the Iranian calendar year (March 20), the statement said, noting that Iran is in close contact with expert teams from World Health Organization and China to rid the country from the epidemic.

It, however, said that a biased campaign with political motivations has been set up which is publishing unconfirmed videos in social media to undermine the efforts by the Iranian government.

Global institutions and analysts have expressed concerns with the impact of sanctions on Iranians' right to health and access to medication.

"The epidemic in Iran is serious now. We need international assistance as the sanctions imposed on the country make international help inaccessible," an Iranian scholar who works in Geneva told the Global Times on condition of anonymity.

Within 24 hours, the Iranian Embassy in China has received 4 million yuan ($576,800) after the embassy released a post on Sina Weibo on Wednesday, saying that Iran is in urgent need of materials like masks, respirators and viral testing kits.

"The generosity and kindness of Chinese friends touched us deeply," the embassy said on Weibo late Thursday, vowing to use the donation to buy disease prevention supplies with transparency.

In the Wednesday Weibo post, the embassy posted contact numbers and QR codes of their WeChat and Alipay accounts, while some netizens commented with screenshots of transfer information under the embassy's post.

Analysts said the US had partly exempted humanitarian goods through certain channels recently, but in name only. Constraints on financial transactions and the reluctance of financial institutions to facilitate trade related to Iran have made accessing medical supplies a persistent challenge.

Even though the US Treasury Department announced partial relief on February 28 to allow humanitarian aid to arrive in Iran through Switzerland, many companies are still hesitant to export critical medical supplies for worries of triggering retaliation from the US, apart from concerns over the difficult transaction procedures.

"US sanctions on Iran are capricious, but they eventually aim to constrain Iran's development and its people's well-being. This exemption of humanitarian aid can be seen as part of the US strategy to lead the Iranian public away from their government seen as a political rival by the US," Tian Feilong, a research fellow in the Middle Eastern studies at the China Institute of Contemporary International Relations in Beijing, told the Global Times.

Iran has become a new focal point for the quick spread of the novel coronavirus since last week. It has reported the second-highest number of deaths of COVID-19 outside of China.

A doctor who refused to be named in Tehran told the Global Times that Iran is barely self-sufficient in medical supplies, but some specialist items are in extremely short supply and need to be imported because of Iran's own limited production capacity. But there are difficulties in acquiring them because of the sanctions imposed by the US.

The US government has initiated "the toughest ever" sanctions against the Iranian industry and banks in November 2018. Institutions and global companies breaking these restrictions may face heavy punishment and exclusion from the US financial system.

The United Nations Special Rapporteur Report on Human Rights in Iran in 2019 suggested that sanctions and banking restrictions will unduly affect the availability and distribution of medicines, pharmaceutical equipment and supplies. The report also warned of the potential negative impact sanctions have on UN and other humanitarian programs in Iran.

"Iran can only fill gaps in limited supplies by turning to alternative, unofficial and sometimes underground ways, such as private agencies, overseas third-party payment or Bitcoin transactions. This is needed to trade with outsiders to keep medical workers on the frontline in the struggle against the novel coronavirus," a manager of a trade services company in Iran surnamed Liu said.

Shortages of essential medical protective equipment such as masks and thermometers are obvious across major cities in Iran which in partly are causing the steep price of supplies, Liu told the Global Times.

"Many doctors and nurses on the frontlines of treating patients with suspected coronavirus do not have standard protective outfits and only wear operating gowns with limited antiviral ability," said Li Hong, manager of an Iran-based local tour agency, quoting her friend who is a doctor in a Tehran hospital. "Goggles and disinfection products are also in short supply."

In an interview with on Monday, Ramin Fallah, vice president of the Iranian Union of Importers of Medical Equipment, said the anti-Iran sanctions have hindered the import of coronavirus test kits.

While several foreign companies are ready to ship COVID-19 diagnostic test kits to Iran, the union is unable to transfer any money, because the sellers insist that payments should be made only via banks, Fallah added.

The intergovernmental Financial Action Task Force made the situation worse by its decision on February 21 to re-blacklist Iran for "its failure to meet with international treaties."

At present, the international community is highly concerned about the severity of the epidemic in Iran. France, Germany, and UK offered Iran $5.58 million in aid to combat the coronavirus while China has dispatched expert teams and donated a batch of nucleic acid test kits and medical equipment to Iran. China's State Councilor and Foreign Minister Wang Yi had a phone call with Iran's Foreign Minister Mohammad Javad Zarif on February 28, expressing support for Iran and sympathy to the patients' families.