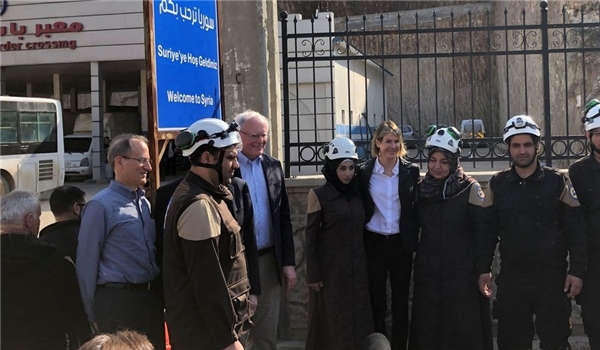 TEHRAN (FNA)- The Syrian Foreign Ministry strongly condemned the US and Turkey for the "illegitimate infiltration" of American officials into the Arab country's Idlib province.

“The Syrian Arab Republic denounces and condemns in the strongest terms the thievery and banditry of the US administration and the Turkish regime,” a senior official at the Syrian Foreign Ministry said on Wednesday.

The source said the “illegitimate infiltration” of US officials into Idlib has been made in collusion with Turkey and reaffirms Washington’s support for Ankara’s aggression in Syria.

“Syria is not surprised by the infiltration of Americans this way after they offered all kinds of support to the terrorist groups, including transporting them into Syria in flagrant violation of all UN resolutions related to combating terrorism,” the official told Syria’s official news agency SANA.

The official added that the US administration considers itself above international law and UN charters which emphasize the respect for states’ sovereignty and non-interference in their affairs.

The Syrian official further accused the US of covering up the crimes of the terrorist groups and hindering their complete elimination despite advances made by the Syrian army against the terrorists.

The comments came after two senior US officials visited Idlib on Tuesday. US representative to the UN Kelly Craft, along with US Special Envoy James Jeffrey, briefly visited Idlib and met with members of the Syrian opposition and the so-called White Helmets group.

Syria launched a counter-terrorism offensive in Idlib and neighboring areas last December, but the campaign coincided with a massive deployment of troops and military equipment by Turkey, which is evidently upset by changing conditions on the ground.